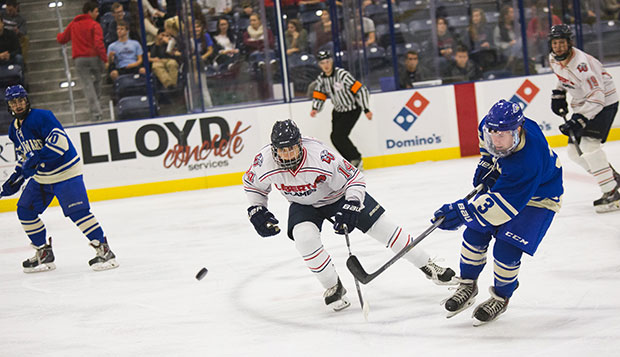 Liberty trailed 2-0 after the first period and 5-0 after the second before graduate forward Christian Garland ended the scoring drought with the first of his two goals midway through the third.

"We gave up a couple breakaway goals to their top guy, Nathan Marks, who's the MVP of the league, and made mistakes we couldn't afford to make and couldn't recover from," Liberty Head Coach Chris Lowes said.

Freshman Blake Scott started in net for the Flames and played the first period and a half, allowing three goals before being relieved by Blair Bennett. He let two more goals in before Scott shut the Blue Hens out in the third until they sealed the win with an empty-netter in the final minute and a half.

After cutting the deficit to 5-2 with five minutes to go, Liberty scored two power-play goals in the final three minutes of play, after pulling Scott to give it a six-on-four advantage. Senior forward Paul Ingles and sophomore forward Tim Bierema netted the Flames' final two goals.

The Blue Hens advanced to Sunday's MACH final against Rider, which upset Penn State in the North Division final.

Senior forward Peter Kazmierczak scored two goals and had an assist and was named player of the game in the opener against UMBC, when graduate forward Ryan Kerr, junior forwards Jordan Barstead and Devon Docksteader, and Ingles also scored.

Prior to the start of the tournament, Docksteader and junior forward Ben Freymond both were selected to the all-MACH first team and Lowes was named the conference's Coach of the Year for the first time. The Flames were also awarded the regular-season North Division championship trophy.

"We brought home a lot of hardware, but not the one (trophy) we wanted the most," Lowes said.

However, with their No. 1 final ranking in the South Region, the Flames had already clinched their first autobid into the ACHA DII National Championships March 18-22 at West Chester, Pa. Liberty will be the No. 1 seed in a pool that also includes William Paterson, the No. 2 seed from the Northeast Region, as well as the No. 3 seed from the Central and the No. 4 seed from the West regions.

"We'll start preparing and we've got to get better," Lowes said. "Patterson's perennially one of the top teams in the country (so) we're going to have to put together three really good games at nationals to advance out of our pool."