Flames battle Beavers to OT in season finale (with video) 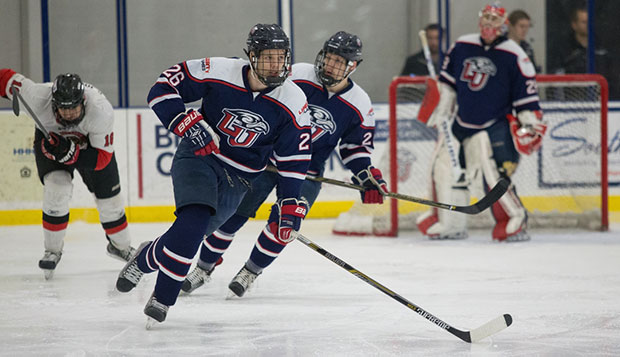 On Senior Night for Liberty University's ACHA Division I men's hockey team at the LaHaye Ice Center, the Flames got goals from three freshmen and fought top-ranked Minot State into overtime for the second time this season before being swept by the Beavers in a series pitting Independent rivals.

"We kind of treated it as our big game," Liberty senior forward and alternate captain Danny Logan said. "It's disappointing that we lost, but I'm proud of the guys' effort. Any time you can bring the No. 1 team in the country to overtime you know you're doing something right. The boys kind of rallied and we played a really good game there."

Minot State (33-2-2), which has advanced to the past four ACHA DI National Championship Final Fours, winning in 2013, scored just 37 seconds into the action when senior forward and captain Brett Nespor made a spin move in the right crease and slid the puck through the five-hole of Liberty goalie Cary Byron. The Beavers, who outshot Liberty 46-28 for the game, extended their lead to 2-0 with just under six minutes left in the first period when defenseman Austin Yano drove wide right and cut back into the right crease where he lifted a short wrist shot into the top left corner.

The Flames (13-18-1), who missed the 20-team national tournament field for only the second time in the 10 years they have played at the DI level, responded just over two minutes later to cut the deficit in half. Logan took the puck from the corner into the left circle and sent a backdoor pass to freshman forward Owen Harris on the endline, where he made a quick move toward the cage and lifted a backhanded wrist shot over the shoulder of Beavers goalie Holden Kurtz inside the left post.

"He called for it, I put it on the stick, and he buried it, so that was a great job by Owen," Logan said.

Liberty generated a couple quality chances early in the second period, with junior forward Grant Garvin sending a cross-crease pass from left to right to sophomore defenseman and head captain Ben Hughes, whose shot was blocked by Kurtz. Then, Logan received a pass from behind the cage out in front and his shot glanced off sliding Minot forward Ryan Curzon wide of the net.

With just over five minutes elapsed in the second, sophomore forward Paul Lamoureux worked the puck out of the boards and started a fast break to Eric Masters, who sent a backhanded pass to  freshman forward Ray Wilson. He faked out Kurtz and deposited the puck through the five-hole to tie the game at 2-2.

"That line's been itching to get one so it's nice to see them get one in the last game of the year," Logan said. "They're the No. 1 team so their offensive power is pretty deadly, but the guys really battled hard and rallied in the second period."

The Flames took their first lead with 2:10 remaining in the second when freshman Jackson Giammona took a pass from Garvin and launched a shot from the top of the right circle through traffic, beating Kurtz top-shelf.

"I liked our compete level," Liberty Head Coach Kirk Handy said. "You have to have that and there were times in the season when we didn't have it. To go against the No. 1 team and have compete all night was a nice way to end the season and for us a way to build on the offseason going into next year."

But as in the first, when they seized their first lead, the Beavers didn't waste much time in netting the equalizer in the first 13 seconds of the third period. Minot State leading scorer Jeremy Johnson netted his first goal of the series, sneaking a shot past Byron off an assist from Sam Briscoe.

And in overtime, Minot State struck quickly again when Johnson found space along the back boards and cut back into the left crease before tucking the puck under Byron for the game-winner, silencing the partisan Flames crowd.

"We would have liked to win, but we liked the way we battled the last two games, with an ounce of desperation that was nice to see," Handy said.

After praying with the Beavers on center ice after the contest, the Flames still celebrated, with graduating seniors Byron, forwards Logan, Bram Erickson, Kyle Garcia, and Tyson Street, and defensemen Peter Shantz, Steven Bellew, and Kyle Miller inviting parents out on the ice for a post-game social.

Handy said the seniors will be missed, but they will have a positive influence in the world, just as they did on their teammates.

"It's a huge loss, but I'm excited to see us move forward and build on what we have here," he said. "Liberty Hockey is not about everything on the ice. It's about working with guys to be Christ-centered men and to be Champions for Christ. It's a good way to see them graduate and move forward, to go out there and change the world."

The Flames will take to the ice one more time on Sunday at 3 p.m. at the LaHaye Ice Center in a battle against Liberty's "Division IV" team. The DI players will play with handicaps that will level the playing field in a game that serves as a fundraiser for the team's March 10-19 hockey outreach to China.