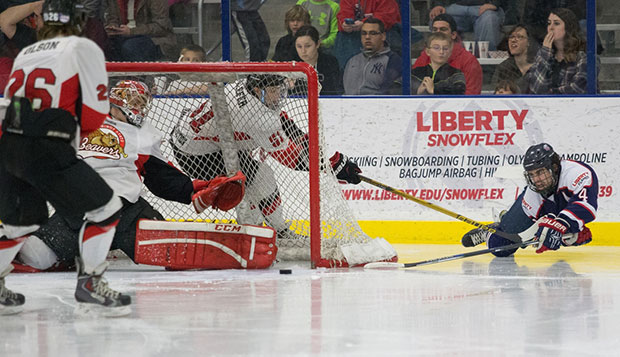 Liberty senior defenseman Steven Bellew makes a diving stab at the puck in an attempt to score a wraparound goal, but is denied by Minot State netminder Connor Beauchamp, Friday night at the LaHaye Ice Center.

Facing the top-ranked team in the country, Liberty University's ACHA Division I men's hockey team jumped ahead of 2013 national champion Minot State early, Friday night at the LaHaye Ice Center, before allowing five consecutive goals in the first two periods of a 5-3 setback.

Senior forward Danny Logan gave fans who brought donations for Gleaning For The World's Teddy Bear Brigade a chance to toss their new and gently used stuffed animals onto the ice when he received a short feed from freshman defenseman Jackson Giammona and lifted a wrist shot from out in front past Beavers sophomore goalie Connor Beauchamp with 16:23 left in the first period.

"I was glad to see us score the first goal and get the crowd in it," Flames Head Coach Kirk Handy said. "It was quick."

But the warm and fuzzy feeling the Flames (13-17-1) received from that sacrificial offering of plush pets was short-lived as Beavers defenseman Dylan Johnson answered with the equalizer 17 seconds later, scoring on a putback of his own shot blocked by Liberty junior goalie Matt Pinel.

Minot State (32-2-2) netted the go-ahead goal with 8:15 left in the first period when Bryce Lipinski poked another loose puck past Pinel inside the right post, cleaning up the rebound of a shot by forward Cole Olson, this time on a power play.

Just 34 seconds later, the Beavers built a 3-1 advantage when Johnson, posting up in the left circle, deflected a shot from the left wing by leading scorer Jeremy Johnson into the upper netting. Then, seconds after another penalty put Minot State on the man advantage in the final minute, senior captain Brett Nespor, the Beavers' leader in assists, sent a cross-crease pass to Austin Yeno, wide open in the left crease, for a high-percentage finish and a 4-1 lead, 45 seconds before the first intermission.

"Our Achilles' Heel all year has been that 10-minute stretch when, tonight, we gave up two penalty kill goals," Handy said. "We adjusted, but it's that little stretch of the game we have to eliminate. It's snowballing on us and it's tough to get back in the game against good teams."

Liberty's defense, anchored by Pinel, prevented the Beavers from breaking open the floodgates in the second period, which remained scoreless until the final two minutes. Moments after Pinel stopped Yeno's shot toward the five-hole on a one-on-one chance after beating sophomore defenseman Ben Hughes, Craig Fournier slipped the puck inside the right post a split second before crashing into the cage, taking Pinel out with him, for a commanding 5-1 Beavers edge.

The Flames refused to throw in the towel heading into the third period as sophomore forward Zac Hayes, who transferred in for the second semester, scored twice in the first 10 minutes to make it a two-goal game. He chased down a lead pass by freshman forward Jeff Wilson before cashing in on the first, sending his breakaway shot under a sprawling Beauchamp with 16:55 remaining.

"Zac has been a real solid player for us since he's come in," Handy said. "It was a nice pass by Jeff Wilson and Zac Hayes had a big game for us. He put shots on net. We need to put more shots on net (as a team on Saturday)."

Then, with 10:03 to go, Hayes received a short return pass from senior defenseman Steven Bellew and rifled a one-timer from the top of the left circle into the upper netting.

"I was proud of the way our team battled back in the third," Handy said. "We challenged them to go out and win a period and we did and I really liked our battle and our tenacity out there."

Handy hopes the Flames can carry some of the energy they generated in the third period over into Saturday's rematch, their season finale on Senior Night, when the puck again drops at 7 p.m.

"For us, it's an opportunity to play one last game, against the No. 1 team in the country," he said. "We just have to build on this, come out and eliminate that bad stretch and play a 60-minute game. We move on and give everything we've got (on Saturday), to work to finish off the year in a great way."