No. 16 Flames open MCLA DI season as underdogs in Atlanta 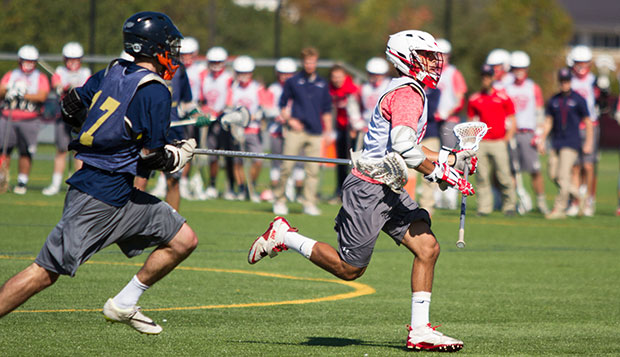 Season-opening matchups against No. 12 Boston College and No. 6 Georgia Tech, Saturday and Sunday at 1 p.m. in Atlanta, will provide Liberty University's men's lacrosse team, ranked No. 16 in the Men's Collegiate Lacrosse Association (MCLA) Division I poll, two excellent barometer readings of how the Flames may fare this spring.

"If want to prove we're a team that can compete both in the SouthEastern Lacrosse Conference (SELC) and in the MCLA, this is the weekend to do it," Liberty Head Coach Kyle McQuillan said. "It's early in the season to start talking about playoffs and nationals, but it will be a good litmus test to see where each of us is currently at."

The back-to-back contests should prepare the Flames well for mid- and post-season play.

"It's something we have to familiarize ourselves with and it'll be good practice for our Spring Break trip (March 15-18 in Florida) and even the SELC (April 22-24 near Atlanta) and (May 16-21 MCLA) national tournaments (in Orange County, Calif.)," McQuillan said.

The Flames will arrive in time to watch Boston College play Georgia Tech on Friday at 7 p.m. The Yellow Jackets, who opened their season with a 21-2 rout of Vanderbilt on Saturday, ended Liberty's season in the semifinal round of last year's SELC DI Tournament.

"That kept us out of a rematch with Virginia Tech in the SELC championship game," McQuillan said. "Georgia Tech's a great team. It's a long road between here and the SELC and national championships (but) I'm hoping we're able to respond well when we get the chance to play them on Sunday."

Liberty expects to be in position to challenge for its second SELC Northwest Region regular-season title in three seasons playing at the Division I level when it hosts defending champion Virginia Tech, ranked first in the SELC preseason poll, April 15 at the Liberty Lacrosse Field.

McQuillan believes the Flames have enough firepower this spring to capture their first SELC DI tournament title and automatic bid to the MCLA DI national championships.

"It's one of those seasons where we're definitely stacked at every position and have a lot of senior leadership," McQuillan said. "We've got, from an offensive perspective, one of the most dangerous teams in the country. In the past, we've been aggressive and fast on the defensive end. We've got a lot of young guys and new faces who will have to prove themselves back there. With the freshman class this year and our recruiting class coming in for next year, which will be our best to date, we're excited about the future of the program."

Liberty Assistant Coach Mike Zumpano said veteran leadership and youthful exuberance are two factors that have created a winning chemistry this spring. The Flames feature eight seniors and 12 freshmen on their 34-man roster.

"They've played in championship games and playoffs and national tournaments," Zumpano said. "That leadership and that focus from those guys should definitely a big catalyst to our success this year, as well as the young guys' ability to work well with the upperclassmen and maintain that camaraderie."

Midfield is arguably the strength of the Flames' lineup this season, led by four seniors, including two who transferred in as sophomores in 2013 — Brett Bernardo (a first-team All-American last season from Marist) and Chad Moore (from Mercer) — Bryce Mrakovich, and faceoff specialist Charles Fianko,

The Flames are nearly as deep and balanced on attack, where senior Ryan Miller is the team's all-time leading scorer with 166 goals and 89 assists through three seasons. He is complemented by sophomore Nick Lombardozzi while Sam Gregory, a freshman from Ohio, and Nick Valentine, a transfer from NCAA Division I Monmouth, are competing for the third starting spot.

McQuillan said the Flames will be equally volatile operating out of their fast break and set offenses.

"Talking about scoring points in transition, Win's a guy who's able to facilitate that for us," McQuillan said. "He's very aggressive, very fast, probably one of the best athletes on the field at all times and we're hoping we can put that to good use this season."