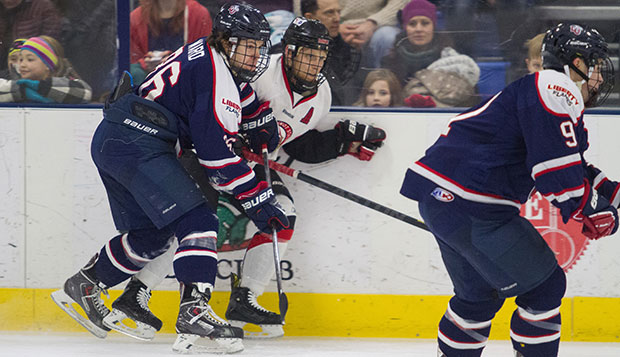 Liberty junior forward Robert Ward, the Flames' second-leading scorer and leader in assists, battles along the boards with a Minot State player in last year's series-opener against the Beavers at the LaHaye Ice Center, a 5-1 win Feb. 20, 2015.

Liberty University's ACHA Division I men's hockey team will end its 2015-16 schedule the same way it started league play this past fall — with two games against the top-ranked team in the ACHA, fellow independent Minot State, this time at the LaHaye Ice Center. The Beavers (31-2-2) have advanced to the past four ACHA Division I National Championship Final Fours, winning it all in 2013.

"We always want to make sure we have competitive games for our guys," Flames Head Coach Kirk Handy said. "It's going to be a good weekend here at LaHaye and that's the way we want it for our fans, who have been awesome all year and have come and supported us."

Liberty remained at No. 18 in this week's ACHA DI rankings, missing the national tournament field for only the second time in the 10 seasons it has competed at the DI level. So this weekend's series against their independent rivals will serve as playoffs of sorts for the Flames.

"We could call it the Independent Cup," Handy said. "We have a great relationship with (Minot Head Coach) Wade (Regier) and Minot State. They're always great games. Even the two we played there, we weren't very competitive in the first one (a 7-0 shutout), but played well in the second one to take it to overtime (before losing 7-6 in a shootout)."

Last year, Liberty capped its regular season with a surprising sweep of the then-third-ranked Beavers, winning 5-1 and 3-1 at the LaHaye Ice Center.

Fans can receive a $2 discount off their tickets by bringing a stuffed animal to Friday night's opener, which they will throw out onto the ice after Liberty scores its first goal to be collected in support of Gleaning For The World's Teddy Bear Brigade.

"From our perspective, it's a chance to honor our nine seniors, guys who have poured their lives into our hockey program, poured their hearts and souls into it," Handy said.

Liberty scouting report: The Flames threw 10 freshmen into the fire this season and now bid farewell to eight seniors entering their final two games in the LaHaye Ice Center. They will need plenty of production from both groups to upset the top-ranked Beavers.

Minot State scouting report: The Beavers, who spent nine of the first 13 ranking periods this season atop the ACHA DI poll, returned to the No. 1 spot after sweeping Arizona in two one-goal games last weekend at MAYSA Arena in Minot, N.D. They are paced by senior forward Jeremy Johnson, a two-time All-American who ranks 20th in the nation in scoring (28G, 19A), including six game-winning goals, and senior captain Brett Nespor (18G, 23A).

Sophomore goalie Connor Beauchamp has logged nearly 1,200 minutes between the pipes this season, sporting a 19-1 record with a 1.90 GAA and 92.6 SP.

All-Time Series: Minot holds a 5-2 lead in the series. Before last season, when both teams won twice on their home ice, the Flames lost the teams' only previous meeting, 3-1, Oct. 6, 2012, in Springfield, Ill.