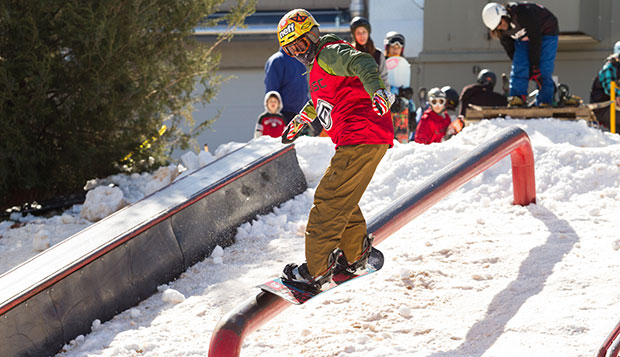 The top three place-winners in the men's snowboard, women's snowboard, and men's ski finals earned cash prizes in a competition witnessed by dozens of prospective students.

"It was a different type of setup, with different features that haven't been used before (at the Liberty Mountain Snowflex Centre," Liberty Head Coach Ryan Leeds said. "That made it an equal playing field for everyone, and a unique and a really fun event to watch."

In the true Rail Jam format, each competitor could take as many runs as they could in a span of 25 minutes and were judged on their best overall performance. Leeds judged the competition along with former Flames competitor Kevin Hoff and Casey Reed.

"It was a fun-looking setup, but there were some pretty icy landings and the competitors had to battle through some pretty crazy falls in order to keep competing through the rest of the event," Leeds said.

Besides several members of Liberty's Ski & Snowboard team, the competition attracted a few competitors from the community and a couple more who train at Wintergreen Mountain Resort, where the Flames and Lady Flames have season passes for practice purposes.

"It was nice to see some new people come out to participate in a new event with our facility," Leeds said.