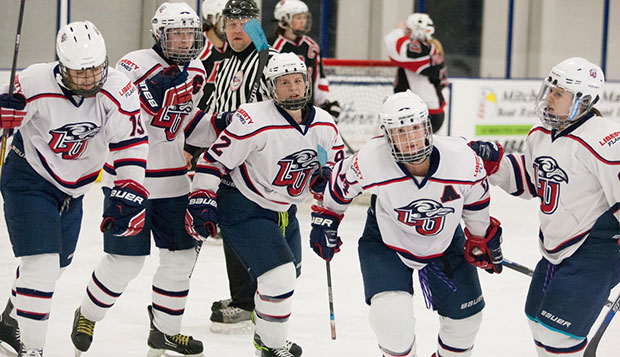 "That line always produces," Lady Flames Head Coach Paul Bloomfield said of Jickling, Gilmour, and senior forward and alternate captain Catharine Burrell, who assisted Gilmour on the seventh goal, Liberty's second straight on the power play. "There were no penalties last night, but a few today and both teams cashed in on a couple."

Jickling netted the game's first two goals, finishing a feed from Gilmour from deep in the left circle on the first, just over three minutes into the contest.

Nine minutes later, Tara Lee ignited a Lady Flames fast break before fellow freshman forward Lauren McDonald set up Jickling for a breakaway chance and she pocketed her shot into the corner.

Moments after being knocked hard to the ice by a Penn State defenseman, Liberty graduate forward Nikki McCombe responded by burying a rebound with just over three seconds left in the first period, stretching the Lady Flames' lead to 3-0. McDonald was credited with an assist after PSU goalie Hanna Scanlon made a great save of an initial shot by sophomore Chelsey Greenwood.

"It was a good way to end our regular season," Bloomfield said. "The girls played really well and really dominated their team. We tried a lot of different line combinations today and gave everyone plenty of opportunities to play."

Two and a half minutes into the second period, a crossing Gilmour ripped a Greenwood rebound past Scanlon for a 4-0 Liberty lead. Three minutes later, McDonald won an offensive draw to freshman forward Lauren Pillisch, who found senior defenseman Madison Fischer cutting down the middle for the finish and a 5-0 advantage.

Less than three minutes after that, the Ice Lions capitalized on the first power play of the series when Liz Tuorinsky ended a shutout bid by Liberty freshman goalie Kelly Hutton (12 saves) with 11:36 left in the second. She gave up two goals, as sophomore Rosie Kelly did on Saturday.

"Both goalies have done a great job coming into nationals, which is good because it gives us options," Bloomfield said.

Six minutes elapsed before Liberty converted on its first power-play opportunity of the weekend when Greenwood, who scored four goals on Saturday, netted the Lady Flames' sixth on Sunday off assists from senior defenseman Brittany Hymers and McCombe.

"Chelsey worked hard today so we gave her the game puck," Bloomfield said.

Just a minute and a half after that, however, PSU scored its second power-play goal when Tuorinsky set up Jackie Saideh, trimming the deficit to 6-2. That's how the score remained for nearly 20 minutes before Gilmour put away Burrell's assist on the power play with just under four minutes remaining in regulation.

After opening the season with a loss and a tie at the Washington Pride, the Lady Flames (19-2-1) won all 20 games against ACHA DI competition this season, with its only loss coming by forfeit after an overtime win at Grand Valley State.

Liberty will conclude regular-season play with two non-ACHA games against the Tri-City (N.C.) Selects next Saturday after the ACHA DI men's game against Minot State and Sunday at 10 a.m.

"We will tweak things on our power play and get ready for nationals," Bloomfield said as the Lady Flames prepare to defend their title March 9-13 in Kalamazoo, Mich.