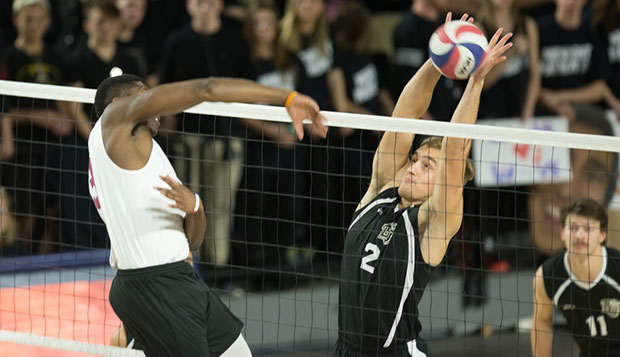 Liberty sophomore middle hitter Luke Werth (right) blocks a Virginia Tech spike as he is backed up by senior outside hitter Sam Eisbrenner in the Flames' season-opener at the Vines Center on Jan. 30.

The Flames (0-5), still reeling from a season-opening loss to No. 1-seeded Virginia Tech, lost four competitive matches and missed a chance at an automatic bid to the East Coast Championships in early April with a top-three showing. Even though it didn't notch a victory, Liberty finished fifth out of 11 teams, with the bottom six seeds playing at Duke.

"Unfortunately, we played Florida and Virginia Tech at the end of the day, just when we were starting to find our rhythm," Liberty Head Coach Bryan Rigg said. "We did well against (Florida). They're not a big team, but a defensively scrappy team, so it was hard to be consistent and put balls down when they're digging everything up."

Liberty shifted from a 6-2 offense, with freshmen Kaden Knepper and Eli Plasterer alternating at setter, to a 5-1 formation, with sophomore Alex Lower directing the offense. Rigg also moved senior middle blocker Sam Eisbrenner back to outside hitter.

"Our new setter definitely distributed the ball well for us," Rigg said. "Our middle hitters were up and down, but everybody on the outside — Josiah Hershberger, TJ Forsythe, and Sam Eisbrenner — had a lot of kills and big blocks at crucial times."

Senior libero Josiah Williams anchored the Flames' defense while their blocking improved as the day went on.

"Josiah definitely played well as usual, especially in serve receive," Rigg said. "He had some amazing efforts. When he's doing well, everything clicks for us.

"Our blocking was pretty bad at beginning of the day, but by the end of the day, we were blocking at every position. Guys were really playing aggressive."

The Flames won their first five matches, defeating Christopher Newport University, Radford, Longwood, and UNC's and JMU's B teams before taking Virginia Tech's B team, ranked No. 7 in Division III, to three games before finishing runner-up.

"Kaden Knepper did an extraordinary job of leading the team," Rigg said. "He was a very effective setter down there. The B team went stride for stride (with the Hokies). They've got a good rivalry now."

Liberty's DI team has next weekend off before traveling to the Hoosier-Illini Classic, a tournament, hosted by Indiana and Illinois, featuring the top 24 ranked teams in the country.

The Flames will compete in the Eastern Collegiate Volleyball Association (EIVA) South Division I championships March 26 at Virginia Tech. They now must advance to the semifinals in Blacksburg to secure an automatic bid to the East Coast Championships, which set the seedings for the April 7-9 NCVF National Championships in Louisville, Ken.