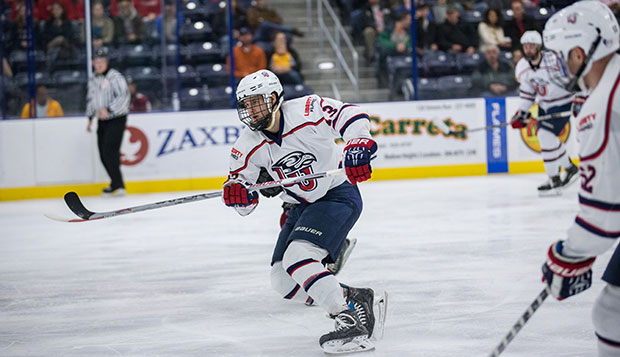 The 2014 ACHA DI national champion Sun Devils, now an NCAA Division I program, improved to 4-0 against ACHA competition this season and 9-22-4 overall with the 7-0 victory as freshman goalie David Jacobson recorded ASU's first shutout of the season.

"They scored four power play goals, three in the third period," Liberty Head Coach Kirk Handy said. "You can't put them on the power play and not expect them to score. Up until that point, I really liked our game. We competed hard tonight and it was a great opportunity to see that level of play and moving forward, it's going to make us a better program, for sure."

Arizona State outshot the Flames by a three-to-one margin, 55-18, for the contest and Liberty junior goalie Matt Pinel made 48 saves.

"Matt played solid for us in net," Handy said. "We definitely had some opportunities, we just weren't able to bear down on them."

Liberty launched five of its 18 shots in the opening minute of its first power play of the game, with 14:02 left in the second period. But the Flames were called for a penalty, evening action at four-on-four for the next minute, and the Sun Devils capitalized on a power play at the 11:15 mark.

Liberty will host No. 3-ranked Minot State (29-2-2), the 2013 ACHA DI national champions, next Friday and Saturday, starting at 7 p.m. in the LaHaye Ice Center in the regular-season finale for both teams.