On the road, top-ranked Lady Flames roll over Ice Lions, 13-2 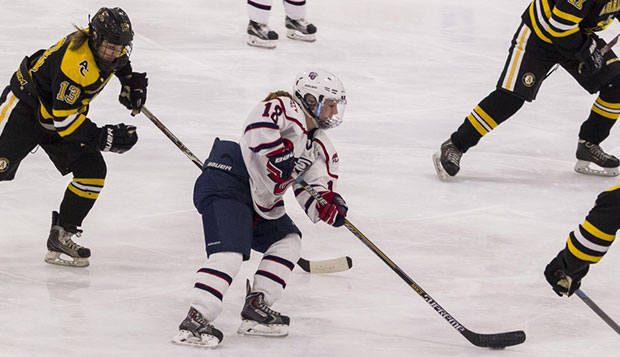 Less than a month after battling Penn State to a highly competitive 8-4 victory at the LaHaye Ice Center, Liberty University's ACHA Division I women's hockey team dominated the Lady Ice Lions on their home ice, Saturday night at the Pegula Ice Arena, winning 13-2.

"It was nice to play in their new arena, which is a beautiful facility," Lady Flames Head Coach Paul Bloomfield said. "Tonight, we played our game and executed very well. Everybody had chances and got the job done."

In a game that had no penalties called, the Lady Flames (17-2-1) outshot the Ice Lions (4-17-2) by a 37-17 margin and got hat tricks from sophomore forward Chelsey Greenwood (four goals) and senior forward and alternate captain Catharine Burrell (three goals, one assist), while senior forward and head captain Carrie Jickling totaled two goals and one assist.

Less than five minutes after the opening faceoff, Jickling opened the scoring by tipping in a shot taken by sophomore forward C.J. Tipping from the left point.

Just 16 seconds later, Lady Flames freshman forward Lauren McDonald flashed her speed and set up graduate forward Nikki McCombe for a second score. Penn State cut the deficit in half with its first goal with just over eight minutes remaining in the first period before Burrell responded less than four minutes later off an assist from McCombe and a deflection by an Ice Lions defenseman in front.

Liberty sophomore goalie Rosie Kelly made a few of her 15 saves on quality PSU chances early in the second period before Greenwood recorded her first goal midway through off a rebound of a shot by Tipping.

She got her second five minutes later to extend the Lady Flames' lead to 5-1 again off an initial shot by Tipping. Less than a minute elapsed before Burrell sniped her second goal off a beautiful assist from senior defenseman Brittany Hymers. Just 33 seconds after that, Burrell completed her hat trick off an assist from Jickling, extending the lead to 7-1.

Liberty added two more goals in the final minute of the second period to take a commanding 9-1 advantage into the third when Jickling capitalized off assists from Hymers and Kelly with 50 seconds left and Greenwood netted her third off feeds from McDonald and Tipping with 13 to go.

Greenwood converted her fourth score with 14:12 remaining in regulation off an assist from Lauren Pillisch in the right corner before Pillisch scored on a breakaway to make it 11-1 just 40 seconds later.

McDonald scored off an assist from Hymers before junior forward Courtney Gilmour finished a feed from Tipping to cap the Lady Flames' scoring.

The two teams will face off again on Sunday when the puck drops at 12:45 p.m.