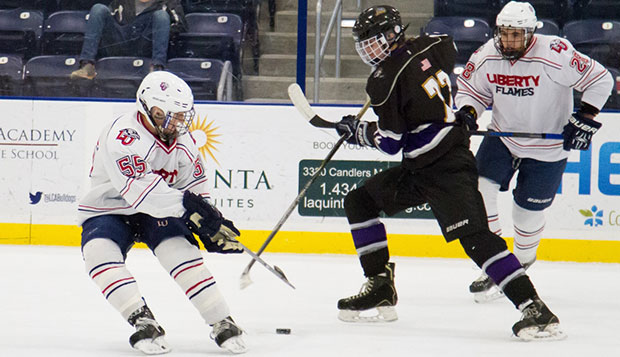 Liberty University's ACHA Division III men's hockey team found out this week it is going to the Feb. 19-20 South Region tournament in Orlando, Fla. To celebrate, the Flames completed their regular season with a weekend sweep of Elon, 5-2 on Friday and James Madison University, 8-4 on Saturday at the LaHaye Ice Center.

On senior night for the Flames on Saturday, Daniel Flaherty, who helped the Flames qualify for regionals for the first time in 2012, got the start in goal as one of seven seniors playing their last home games.

JMU (3-7) opened an early 2-0 lead before Liberty scored five unanswered goals in a span of 18 minutes from late in the first to late in the second period.

Senior forward Jeremy Martin pulled the Flames back within 2-1 with 2:29 left in the first period by slipping a backhanded putback of a shot off the stick of freshman defenseman Dillon Brown past Dukes goalie Alex Santoliquido from the right crease.

Just 30 seconds into the second, with Liberty on a power play, graduate forward Karl Harter received a pass from junior forward Caleb Weesner along the left endline and lifted a sharp-angled shot into the right-side netting to knot the score at 2-2.

With the Flames on the fast break, sophomore forward Jonathan Klakring dropped the puck back to junior forward Kade McDaniel before deflecting a shot taken by sophomore Jimmy Brady along the left boards past Santoliquido for a 3-2 lead midway through the second.

"Ever since the first five games (Klakring) has been unreal," Liberty Head Coach Rett McGibbon said. "He's been a first-line center in our league."

Less than three minutes later, freshman defenseman Nathan Glick, who scored a wraparound goal against Elon on Friday, started a shorthanded fast break with a steal before showcasing his speed, accelerating right to left through the crease and lifting a backhander into the net.

Just two minutes after Glick's goal, Klakring, cutting into the left crease, finished a rebound of a shot by McDaniel from the right side, extending Liberty's lead to 5-2.

JMU got one goal back in the final minute of the second before the Flames responded with three more in the first seven minutes of the third — by Martin, Klakring, completing his hat trick, and sophomore forward Travis Swyers, who finished off a shot by senior defenseman Parker McIntyre that glanced off the crossbar and down in front of the goal line.

After losing eight of their first 10 games, the Flames (12-10) have now won 10 of their past 12. Liberty moved into the top 10 in this week's fourth and final ACHA DIII rankings, up three spots to No. 9, to secure their second regional berth in the past three seasons and third in the past five.

"I'm really impressed with how our guys have bought in and played and fought tooth and nail," McGibbon said.

The Flames will be the No. 8 seed and face No. 5 Vanderbilt in Friday's first round, starting at 2 p.m., needing to win that and a second game on Saturday to secure their first-ever trip to the ACHA DIII National Championships, March 8-12 in Grand Rapids, Mich.

"We know Vanderbilt has a really solid goaltender, so we're going to have to be buzzing around the net creating lots of traffic and havoc," McGibbon said. "It took us about a period to buy into our style of game today. If we can do that right off the bat, use our speed, get the puck in deep, and not turn it over at the blue line, we've got a good shot." 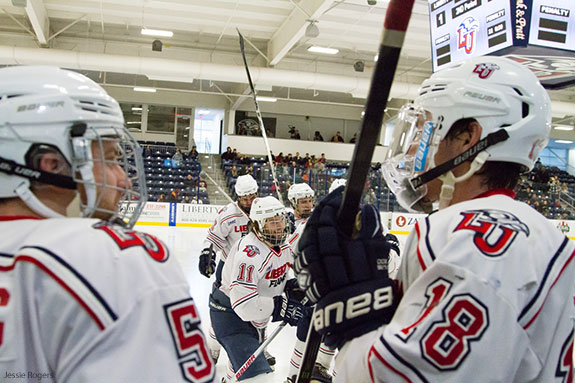