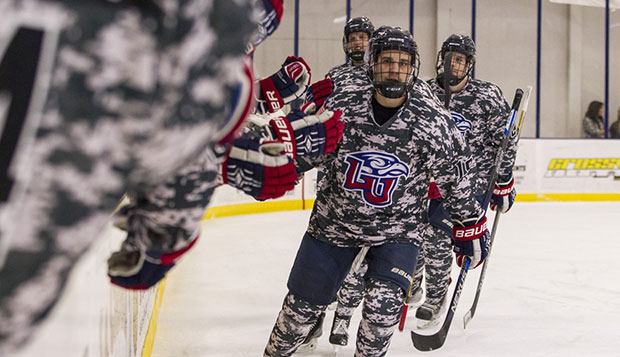 Liberty University's ACHA Division I men's hockey team flies into Tempe, Ariz., for the fourth year in a row on Friday night for a one-game showdown Saturday with former league rival Arizona State University, now competing in its first season at the NCAA Division I level in the Pac-12.

"It's a great opportunity," Flames Head Coach Kirk Handy said. "Obviously, we've had a great relationship with (Sun Devils Head Coach) Greg Powers and Arizona State for many years. We enjoyed playing them at the ACHA level and now we're excited to play them at the NCAA level. It's the first time in the history of our program. We have played NCAA Division III teams, but never a Division I team."

Powers reciprocated the sentiments about facing off against Handy and the Flames.

"I've always really respected Liberty and Kirk Handy and how they run their program," he said. "Historically we have had a great relationship with them and I'm very happy we get to play them one last time."

ASU has experienced a turbulent transition to the highest level of collegiate hockey in the United States, going 5-22-2 against NCAA competition this season while logging more than 35,000 miles in the air traveling around the country with very few league opponents within driving distance.

"It's been a bit of an interesting ride for them in their transition," Handy said. "No doubt, they're going to have a fantastic program."

The 2014 ACHA DI national champion Sun Devils are 3-0 against ACHA opponents this season, outscoring Arizona and Ohio by a 22-4 margin. They will face the Wildcats again next Friday before concluding their season with two games against the United States U18 National Team on Feb. 27-28 at home.

The Flames will practice at Oceanside at 10 p.m. Arizona time on Friday to get ready for Saturday's 6:30 p.m. opening faceoff.

"It's a great opportunity for our program," Handy said. "We're going out there to become better as a program, as a team this year. We have to go out there with a lot of excitement."

Last season, facing the defending national champion Sun Devils on their home ice, Liberty opened a 2-0 lead on the Sun Devils in the first 20 minutes before being allowing four goals in the second period of a 6-4 defeat.

Liberty Scouting Report: The Flames snapped a six-game losing skid against ACHA DI competition with 5-4 overtime and 8-4 regulation wins over Oakland at the LaHaye Ice Center, completing a four-game season sweep against the Golden Grizzlies.

Senior forward Kyle Garcia netted four goals and distributed two assists and junior forward Grant Garvin (19 goals, 16 assists) added a hat trick of goals and assists in the 8-4 triumph, overtaking Robert Ward (6G, 23A) is the Flames' leading scorer. Freshman defenseman Zane Schartz (7G, 21A) ranks third in points (28) after overtaking senior forward and alternate captain Danny Logan (11G, 15A), who sat out the first game against Oakland after receiving a one-game suspension after the series at Delaware.

ASU is 5-3-4 at home this season, including two ties Dec. 4-5 against the University of Alberta of the Canadian International Sport (CIS) association.

Coaches: Kirk Handy is in his 16th season as Liberty's head coach with an overall record of 346-155-20. Greg Powers, a three-time All-American goalie during his playing career at Arizona State (from 1995-99) is now in his seventh season at the helm, boasting a 172-49-13 mark, including 167-27-11 against ACHA competition. He guided the Sun Devils to the past three ACHA DI National Championship Final Fours, winning their first title in 2014.