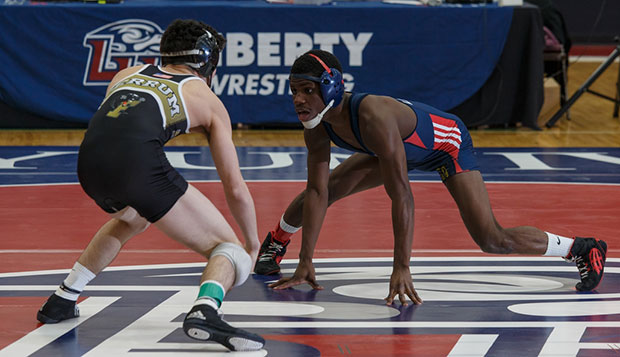 Liberty University's wrestling team lost two narrow decisions early in Wednesday's dual meet against Ferrum College, putting the Flames on their heels and setting the tone for a 36-6 setback in their only home meet of the season, and first match on their brand new mat in the LaHaye Multipurpose Center.

Flames freshman Brian DiCesare seized a 5-4 lead in his 133-pound match with an escape in the last of three 30-second tie-breaking overtime periods before allowing Ferrum's Bobby Ziehfreund to reverse for the victory just before the buzzer.

At 149, Ferrum's Collin Saunders reversed to tie the match at 4-4 midway through the third period before Liberty's Ike Podell escaped with 20 seconds remaining only to let Saunders score a takedown with his feet inbounds on the edge of the circle with eight seconds to go. Podell nearly recorded the match-winning reversal, putting his opponent to his back in the closing seconds, but the referee ruled Saunders maintained control.

"We had an opportunity to run the first four weight classes, no doubt about it," Liberty Head Coach Jesse Castro said. "It should have been a closer match than it was. Whether we could have won or not, honestly, actually, I really do feel like we could have won, but here's the deal. We don't deserve it. We're not working hard enough. That team outworked us."

Ferrum (12-4, ranked among the top 25 NCAA Division III schools) closed out the night on a 30-point roll, including four pins in the next five weight classes.

"They're good, but they're not that good," Castro said. "You can't win a dual meet getting pinned four times. That can't happen."

At 165, Liberty sophomore Michael Bryant came out on attack and opened an early 4-1 lead before allowing Josh Alston to tie it at 4-4 by the end of the first period on an escape and takedown. Bryant later rallied from a 10-6 deficit with a takedown in the closing 30 seconds of the third period, but couldn't get the back points he needed to force overtime and dropped an 11-8 decision that put the Panthers up 15-6.

The Flames proceeded to drop the next three bouts by fall, turning a competitive match into a lopsided loss.

"Honestly, we underperformed," Smith said. "We're a lot better than what we showed tonight. We gave up a lot of bonus points and the momentum shifted early in the match. We couldn't get the job done tonight."

"We've got to do some soul searching and we don't have a lot of time," Smith said. "We have exactly a month until the national tournament. Something's got to happen. We've just got to refocus and hone in on our goal."