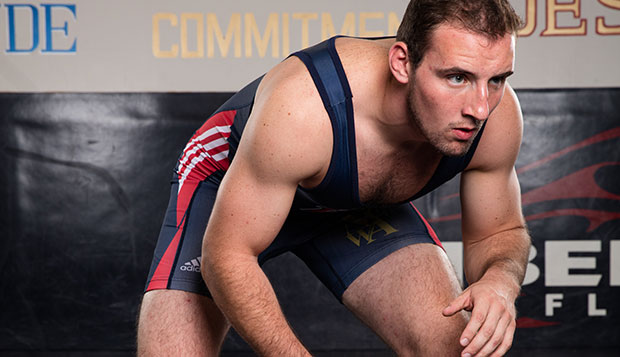 Five upperweights from Liberty University's wrestling team placed in the top five at Saturday's Messiah Open, competing against wrestlers from a variety of NCAA Division I, II, and III schools.

"We kept some of our starters home and I was pleased with the results overall," Flames Head Coach Jesse Castro said. "It was excellent preparation for our upcoming (Mid-Atlantic) Conference" tournament, Feb. 27 in Johnson City, Tenn.

Ferenczy, seeded second, pinned York's John Anthony in 2:23 in his opening match and Messiah's Tyler Hershey in 5:56 of his second bout before earning a 4-3 decision over SUNY-Cortland's Ryan Gerena. He was then pinned by Rutgers' Jordan Pagano in 3:14 and lost a 5-3 decision to Maryland's top-seeded Derrick Evanovich in his consolation semifinal before scoring a 10-2 major decision over Vinny Levin in the fifth-place final.

Smith needed only one minute even to pin Tyler Norwood of Thaddeus Stevens in his opening match in the 184-pound bracket before dropping a 13-7 decision to Messiah's Victor DeFrance. That sent him to the consolation semifinals where he lost to Westlake, 4-3, before winning his fifth-place bout against Elizabethtown's Joshua Stencler by medical forfeit. Westlake lost a 9-4 decision to Messiah's Jeremy Bailes in the consolation final.

In the heavyweight bracket, both Johnson and Hancock recorded pins in the second round of wrestlebacks — Johnson in 2:35 over Messiah's David Giovannacci and Hancock in 6:31 over York's Nicholas Carpenter. They both advanced to the consolation semifinals, Johnson with two medical forfeit and Hancock with two decisions — 12-3 over teammate Thomas Bartholomew and 4-2 over Elizabethtown's Eric Eckstein — before Johnson lost a 5-2 decision to Gettysburg's Camden Stoops in the third-place match and Hancock won his fifth-place bout by medical forfeit.

This Wednesday, Liberty will host Ferrum College, ranked No. 21 in NCAA Division III, in the Flames' only home dual meet of the year, starting at 7 p.m. in the LaHaye Multipurpose Center.