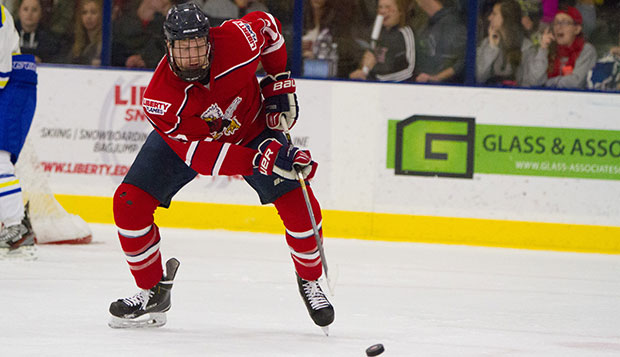 "Those guys played well all night," Liberty Head Coach Kirk Handy said. "Four goals for Garcia, three goals for Garvin. That's huge. The other lines were going. It's just the offense seemed to come from that one line tonight."

Liberty (13-15-1, ranked 18th in the latest ACHA DI poll) outscored unranked Oakland (6-18-1) 2-1 in the first and second periods and 4-2 in the third to double up their guests and win back-to-back games for the first time this semester.

Quick goals by Garvin and Garcia, off reciprocal assists just 32 seconds into the first period and 39 seconds into the third, respectively, set the tone from the start. On the first, Garcia skated behind Oakland's cage and sent a pass to Garvin in the right circle where he buried his one-timer for a 1-0 advantage.

"We liked our start," Handy said. "We were able to establish ourselves and that was good."

Then, 12:28 left in the period, Zac Hayes picked up a loose puck in the offensive zone and fed a short pass up to junior forward Robert Ward deep in the left circle, where he easily skated the puck around Golden Grizzlies freshman goalie Sean Parker for an uncontested score and 2-0 cushion.

With 10:40 left in the first, Oakland junior defensemen Ian Jacobs and Derek Britton and junior forward Drew Parus had near misses around Liberty's cage, manned by graduate goalie Cary Byron and cleared out by his back-line defense.

Oakland got one goal back with 8:47 left in the first when head captain Bill Kocher spun and sent a perfect crossing pass from the right corner to fellow sophomore forward Ryan Rotondi for a one-time finish in the left crease.

Garcia added two goals in the first six minutes of the second period to stretch the Flames' lead to 4-1, finishing feeds from Garvin and graduate defenseman Peter Shantz on the first before one-timing a power play goal in off assists from freshman defenseman Kyle Crane and sophomore defenseman and head captain Ben Hughes, in his second game back from missing the previous two months due to injury.

"It was good to get Ben Hughes back there (on defense)," Handy said. "He played well for us tonight. Overall, it was a pretty solid effort. From our take, we were able to execute in the power play tonight. We were able to for the most part, stay pretty disciplined. Those are big things for us."

The Golden Grizzlies got one back when Rotondi netted his second score at the 6:20 mark after the Flames could not capitalize on a couple more power plays, including a five-on-three for one minute.

A six-goal third period — the last two by the Flames — gave the home crowd plenty to cheer about in the second-to-last series of the regular season at LaHaye.

Garcia opened the scoring with a putback of a shot by freshman forward Zechariah Roberts off a pass from Garvin. Freshman forward Frank Saputo answered for Oakland less than three minutes later before Garvin used quick reflexes to tip Roberts' shot from the left circle into the top right corner of the net less than two minutes after that, stretching Liberty's advantage to 6-3.

A roughing penalty against Garvin along the Golden Grizzlies' bench allowed Jacobs to rifle a power-play goal past Byron to cut the Flames' edge back to two goals before Liberty padded its lead with two more scores in the final 5:30. On the first, with the Flames on a fast break, Garvin put away a beautiful backhanded cross-crease assist from Garcia a split second before crashing into the cage, knocking Parker into the net. Then, with 10 seconds remaining in regulation, Garvin returned the favor with a quick feed from the left circle to Garcia cutting through the left crease.

"We're very happy with our effort tonight," Handy said. "There were a couple times when we let them back in the game, let them back to two goals down, but we were able to put some more pucks in the back of the net and create a little more of a spread, which was good for us."