No. 1 Liberty shows second-ranked Adrian who is top dog 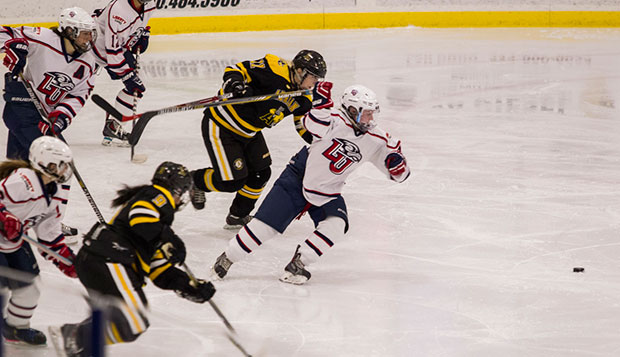 Lady Flames freshman Lauren McDonald (right) chases after a puck with several of her teammates and Adrian opposing players in hot pursuit at the LaHaye Ice Center.

In a rematch of Friday night's shutout victory and last season's Final Four triumph, Liberty University's No. 1-ranked ACHA Division I women's hockey team gave up its first goal in four games, but got its first hat trick from freshman forward Lauren McDonald in a 4-1 rout of the second-ranked Bulldogs.

"They're the second-place team so it was really physical because they wanted it, but we wanted it a little bit more than them because we want to defend our title and stay on top," McDonald said.

Sophomore C.J. Tipping, who assisted Liberty's only goal in Friday night's opener, netted the second with 4:42 left in the second period. She lifted a high-speed wrist shot from the high slot off assists from McDonald and senior forward Catharine Burrell, who scored Friday's only goal.

Adrian struck back less than three minutes later when Kaillee Hardy, stationed in the right crease, put back a shot from out front by fellow forward Alicia Tait, past Lady Flames freshman goalie Kelly Hudson. That trimmed Liberty's lead to 2-1 with 1:48 left in the second and snapped the Lady Flames' shutout streak at 129 minutes.

The Lady Flames didn't waste much time in answering, however. McDonald followed up Tipping's shot, set up by sophomore forward Chelsey Greenwood and blocked by Dungey, depositing the loose puck into the open left side of the net with a backhanded finish that extended the lead to 3-1 just 34 seconds before the second intermission.

Arguably the game's scrappiest and prettiest goal came early in the third period, when Liberty senior forward and head captain Carrie Jickling stole the puck back on the offensive end and sent it across the ice to freshman forward Lauren Pillisch, who dropped it back to senior defenseman Brittany Hymers. Hymers' shot from the top of the left circle was deftly deflected by McDonald into the upper netting, completing her hat trick and capping the scoring.

Liberty, which outshot Adrian 41-34, killed two penalties in the final eight minutes and weathered a relentless attack Bulldogs attack with no further goals allowed as Hudson made 32 saves.

"We played pretty defensive hockey and both goalies both nights played really well," Bloomfield said. "We played (sophomore goalie) Rosie (Kelly) last night and we were kind of leaning toward playing her again tonight but we thought ‘Well, let's try Kelly,' and Kelly's done a good job and both goalies are ready for nationals."

"This firmly plants us in first place going into the final ranking," Bloomfield said. "We've just got to look after business next weekend at Penn State. I think we should be in good shape for next weekend. Everyone's pretty healthy and we need everybody as healthy as we can get them."

Liberty withstood some physical play, holding their ground in the face of the Bulldogs, particularly Hymers.

"They banged her around a little bit tonight, but she's a solid kid and she keeps coming," Bloomfield said. "She just keeps playing regardless of what's going on. She'll be all right. She's as strong as a rock."

Saturday was senior day for five of the Lady Flames, but there's a good chance three of them could return for a fifth year of eligibility next fall.

"For two of them, this will be their last games, for Madi (Fischer) and Nikki (McCombe) because they've timed out, year-wise," Bloomfield said. "Carrie (Jickling is) coming back next year and I think Catharine (Burrell's) coming back and there's a good chance we may get Hymers back, which would really reinforce our D for next year."