Liberty extends shutout streak in battle with No. 2 Bulldogs 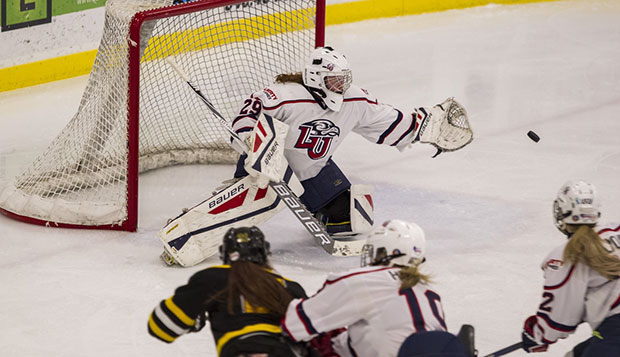 In a showdown between the Nos. 1 and 2 teams in the national rankings, Liberty University's ACHA Division I women's hockey team notched the 200th victory in program history with a 1-0 triumph, late Friday night in the LaHaye Ice Center.

Sophomore goalie Rosie Kelly recorded her third consecutive shutout in net, stopping all 24 shots by the Bulldogs (15-4-1), and senior forward and alternate captain Catharine Burrell netted her fourth goal in those three games and her team-high sixth game-winner of the season.

"We've been focusing a lot over the last couple weeks on tightening up our first period and coming out to a better start so I thought we reallly delivered that tonight," Liberty senior forward and head captain Carrie Jickling said. "We've just got to keep cycling because in the offensive end we've had quite a few chances. We've just got to get more pucks to the net and, hopefully, the goals will come."

The top-ranked, defending ACHA DI national champion Lady Flames (15-2-1) remained undefeated at home since Nov. 16, 2014, a 16-game stretch including eight this season, starting with the first win in the renovated arena on Oct. 23, 2015.

But it was a battle all night for the Lady Flames in the rematch of last year's ACHA DI National Championship semifinal, won by Liberty, 3-1.

"This is only their third season (at ACHA Division I). They used to be an NCAA Division III school," Liberty Head Coach Paul Bloomfield said. "We had opportunities to score and we didn't, but they had opportunities, too. It was a pretty decent match. I'm glad we got the win."

Liberty got the golden goal in the final second of a power play when sophomore forward C.J. Tipping launched a shot from the top of the left circle and the rebound came right to Burrell and graduate forward Nikki McCombe, left unchecked in the left crease. Burrell, who had a hand in all five goals in last weekend's sweep of visiting Davenport, buried the putback into the open left side of the net past goalie Alison Dungey with 11:38 left in the first period.

"I felt the girls played well tonight," Bloomfield said. "We cycled the puck well, didn't get as many opportunities on the net as we would have liked, but they scrambled and there's a lot of them. Their bench was full. Our D was good and they had some opportunities, but we shut them down. Everybody worked hard out there. We played a pretty strong first period, which traditionally hasn't been our style."

Adrian appeared to tie the contest late in the first period, but Bulldogs left wing Nichole Laflamme had her goal called back due to a goaltender interference call as the puck slipped past Kelly from close range.

"Sometimes you get those bounces. Sometimes they don't go your way," Lady Flames Assistant Coach Justin Forth said. "The call went our way. Rosie made the save and the other girl kind of shoved her into the net at the same time that the puck went in. It was the ref's discretion. That was definitely helpful."

Bloomfield hopes Liberty can put Adrian away much earlier in Saturday's rematch, the Lady Flames' last home game of the regular season, set for 3 p.m.

"It'd be nice to beat them by three or four goals (Saturday) to make a point," he said, noting if they can complete the sweep, the Lady Flames will have all but clinched the No. 1 seed for the March 9-13 ACHA DI National Championships in Kalamazoo, Mich. "This team's not going to let up, so we've got to come back (Saturday) and be ready to play hockey again. We've got to look after business (Saturday). You've got to play for 60 minutes."