Flames break into top 20 in first national ranking of season 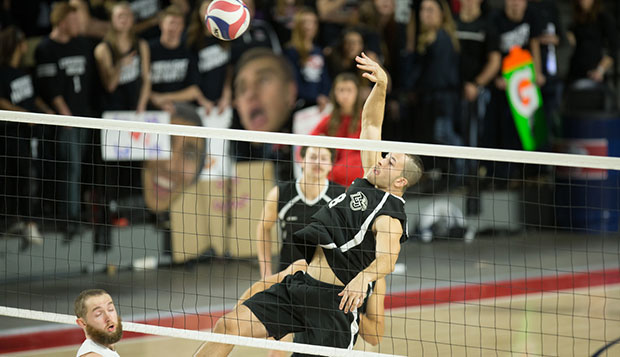 Less than a week after being swept by Virginia Tech in the spring season-opening Midnight Mayhem match played in front of more than 4,000 fans in the Vines Center, Liberty University's men's volleyball team still moved into the top 20 in the first National Collegiate Volleyball Federation (NCVF) Division I rankings of 2016.

"This is higher than we were in the polls at any point last year and it is three spots lower than our seeding at Nationals last year," Liberty Head Coach Bryan Rigg said.

Virginia Tech, which was ranked as high as No. 1 and won the Eastern Intercollegiate Volleyball Association (EIVA) Division I tournament last year before ending the season ranked fifth, starts the 2016 season at No. 3, behind only No. 1 Illinois and No. 2 Wisconsin-Oshkosh.

"Our performance at the Michigan State Hardwood Classic (where the Flames finished fifth out of 24 teams on Nov. 7-8) was enough to keep us in the top 25 ranking in the country, but there is a great deal of work to be done and we have already started to shake up our lineup and to make big changes," Rigg said. "It is my full expectation that when we play again (on Feb. 13) there will be a new vigor on the team."

This year's NCVF National Championships are set for April 7-9 in Louisville, Ky.