No. 18 Flames must sweep Grizzlies to stay in playoff hunt 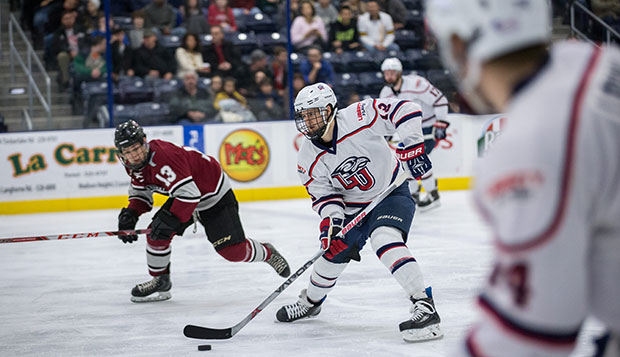 Liberty junior forward Chase Harris, the Flames' fifth-leading scorer this season as a converted defenseman, has been designated as an alternate captain.

Liberty University's ACHA Division I men's hockey team returns to the LaHaye Ice Center for this weekend's series against Oakland (Mich.) University, seeking to stop its six-game skid against ACHA DI teams this semester and complete a four-game season sweep of the Golden Grizzlies.

Oakland and Liberty both moved up to DI status in 2006, the year after the Flames fell to the Golden Grizzlies in overtime in the ACHA DII championship game. Oakland won the DI national title in its first season playing at that level in 2007.

"It's an interesting game, a nice rivalry that's been built up over the years," Flames junior forward Chase Harris said.

"It's cool to join the leadership group as we're getting ready for the rest of the year and moving forward," said Harris, who ranks fifth on the team in scoring with seven goals and eight assists. "It's just a really nice thing that the coaches were willing to put their faith in me to be a leader on this team. It's a good opportunity. Hopefully, I can be a role model for the guys coming in next year and for the guys for the rest of the year."

Harris is optimistic the Flames can catch fire at the end of the regular season the way they did at the end of last semester to make a late push for their ninth bid to the ACHA DI National Championships in the past 10 seasons.

"The season's not over by any means," he said. "We need to start playing harder, playing for the fans, playing for ourselves, playing for a chance to get back into the playoff picture. You never know what can happen in a season. We've just got to keep going until the end, until they say we can't play anymore."

Liberty scouting report: While Robert Ward (5G, 22A) is the Flames' leading scorer, fellow junior forward Grant Garvin (15G, 11A) and Logan (11G, 15A) are their only double-digit goal scorers. Freshman defenseman Zane Schartz (6G, 18A) ranks fourth in points (24).

Both the Flames and Golden Grizzlies have given up 117 goals this season while Liberty has netted 93 of its own, compared to 75 for Oakland. Hughes has practiced with the team this week and could give the Flames a boost if he returns against the Golden Grizzlies. Otherwise, they will lean on Bellew and Schartz as well as graduate Peter Shantz, senior Kyle Miller, and freshmen Jackson Giammona and Kyle Crane to anchor the defense.

Oakland scouting report: The Golden Grizzlies have won twice as many games on the road (4-7) this season as at home (2-9-3). They are coming off a home-and-home split against Rochester this past weekend after splitting with Mercyhurst the weekend before.

Oakland features 10 players who have scored 10 points or more this season, but only one, forward Kyle Nelson (13G, 9A), with over 20. Forward Joe Pizzimenti (5G, 14A) ranks second followed by forward Ryan Rotondi (7G, 10A) and defenseman Ian Jacobs (7G, 10A) who are tied for third.

All-time series: The Flames are 18-13-2 against Oakland after sweeping the Golden Grizzlies on Nov. 20-21 in Grand Rapids, Mich.

Coaches: Kirk Handy is in his 16th season as Liberty's head coach with an overall record of 344-155-20. Oakland third-year Head Coach Gordie Schaeffler, who is in his 11th season with the program after previously serving as an assistant, is now 48-53-2.