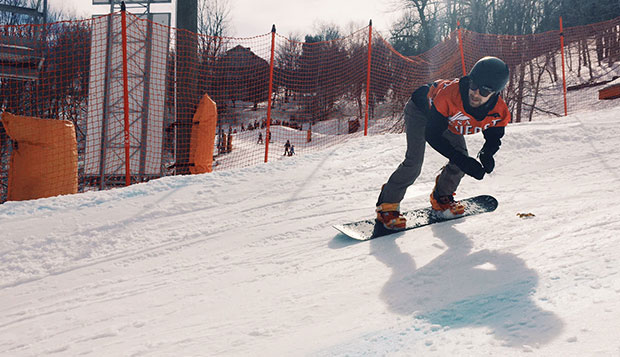 Junior snowboarder Chris Holt was the Flames only finalist and placed third in Sunday's Boardercross at Appalachian Mountain.

"We were really proud of all of our riders," Flames Head Coach Ryan Leeds said. "The conditions weren't perfect. They were pretty icy. But in men's snowboarding, we only have seven riders so to have six in the top 10 at Saturday's Rail Jam was good. We shoot for a pack finish with the goal to improve our overall team score."

Flames junior team captain Brendan McHugh was the overall winner after advancing to the finals by posting the best score (8.0) of the 52-rider field on his second run. Sophomore Austin Santos finished third despite injuring the AC joint in his shoulder in the finals and sophomore Nicholas Williams (fourth), junior Chris Holt (seventh), freshman Eric Dougherty (ninth), and sophomore Garrett Long (10th) rounded out the top 10.

Lady Flames senior Brandy Fronte was runner-up out of 26 riders in the women's snowboard Rail Jam with her second-run score of 7.5.

"She wants to learn new things and she's going for it and it's showing in her results," Leeds said. "The level of competition is going up this year in the Southeast, which better prepares her for nationals and what kind of competition she'll have there. It's forced her to push herself to try tricks she hasn't tried before."

"The men's ski final was really close and Jon (Wong) had a deep bag of tricks," Leeds said. "He was doing a lot of left spins and right spins on and while he was on the feature, he had a couple of switch-ups."

Wong also placed second overall in Sunday's Skiercross, after Holt was Liberty's only snowboarder to reach the four-man finals and placed third.

Lady Flames freshman Rebecca Lawrence claimed first place in the women's ski Rail Jam, based on her best score of 5.5

Complete results from the Rail Jam are available online. Sunday's Skier and Boardercross results have yet to be posted.

Liberty will travel to Massanutten Resort near Harrisonburg, Va., this weekend to compete in its first Slopestyle event Saturday and Boardercross and Skiercross races Sunday, its last competitions before USCSA Regionals in New Jersey on a date in late February still to be finalized. That will be the final preparation for USCSA Nationals, set for March 6-12 at Lake Placid, N.Y.