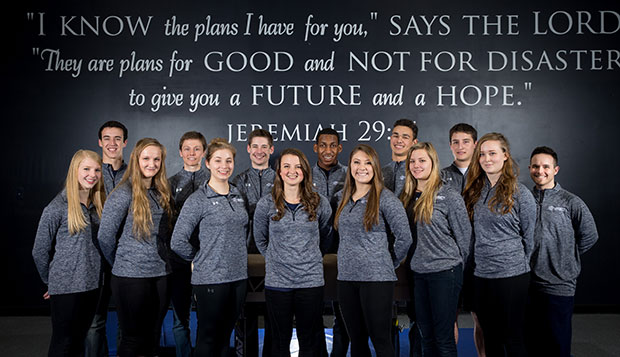 The Lady Flames, meanwhile, competed in the second eight-team women's session against Kent State, Miami of Ohio, Michigan, Ohio State, Virginia Tech, and Washington University in St. Louis, and finished third out of 15 teams in the two groups.

In the all-around competition, Liberty's Juli Bouton placed third with a score of 34.85 — behind only Ohio State's Mieley Conrad (37.55) and Miami of Ohio's Traci Powers (35.65) — while fellow freshmen McKella Johnson finished fifth at 34.2, just five-hundredths of a point behind Miami's Erica Rodrigu (34.25).

Bouton (9.65) and junior Ashley Grim (9.45) tied for first and fourth, respectively, in the floor exercise. Bouton and Grim tied for third in the vault with identical 9.2 scores while Johnson finished tied for seventh at 9.1 and Leah Corpora was 10th with an 8.9. Johnson also placed third in the uneven bars with a score of 8.0 while Bouton came in seventh at 7.5.

For Liberty's men, sophomore Cameron Streeter finished fifth in the all-around competition with a cumulative score of 72.1. Junior teammate Austin Minuto (64.2) took ninth and sophomore Rufus Chappell (56.2) came in 11th in a field that included competitors from 12 other schools.

Freshman Gabe Vaillahermosa took ninth on the floor exercise (11.9) while sophomore Rufus Chappell landed a 13th-place score on the vault (11.1) and finished 15th on the pommel horse (8.7).