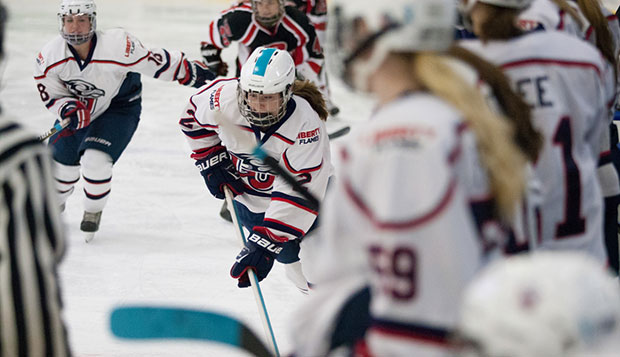 The game remained scoreless until the final two minutes of the second period, when Burrell received a cross-crease assist from graduate forward Nikki McCombe and finished top shelf from in the right crease. Burrell, who recorded a goal and two assists in Friday night's 3-0 win, replicated the goal just 12 seconds after the third-period faceoff, this time taking a pass from fellow senior forward and head captain Carrie Jickling, Liberty's leading scorer, from the left circle and lifting another upper-net wrist shot for the 2-0 cushion.

"I felt that we really played well," Lady Flames Head Coach Paul Bloomfield said. "The first period was a little bit slow, but they came on and wow, the third period, we just totally controlled and dominated everything that was going on. We were cycling really well, but just not getting it in the goal."

Liberty (13-2-1) outshot the Panthers by a 40-13 count, but only converted five percent of their shots, both at even strength.

"With the number of shots on net, it should have been 8-0," Bloomfield said. "Their goalie was really on her game and we were hitting her for some reason."

Kelly wasn't tested as much as she was in Friday night's 3-0 triumph, but she traded places with freshman Kelly Hutton as the second and third leading goalies in ACHA DI. Both boast goals-against averages hovering right above 1.0 and save percentages well above 90.0.

Liberty, ranked first in ACHA DI for the first three polls, welcomes second-ranked Adrian — which was upset by No. 9 Michigan State this weekend — to LaHaye next Friday at 9:45 p.m. and Saturday at 2 p.m.

Saturday's game against the Panthers was less physical than Friday's opener, as the officials took control of the contest, sending six players from each side to the penalty box.

"It was better and they were calling some penalties, which makes the coaches tighten things up a bit," Bloomfield said."I'm glad we get everybody pretty healthy with Adrian coming in next weekend. We're going to work this week, to get everybody ready for them to be here. We've just got to look after business next weekend. That's our goal."

The defending champion Lady Flames will look to solidify their No. 1 seeding and generate as much momentum as they can in their series against the Bulldogs and a final road trip to Penn State on Feb. 13-14 to take into the ACHA DI National Championships.

"We can't let up," Bloomfield said. "We're not dominating and because our bench is small, we have to be sharp and stay on our game."