Lady Flames fight off Panthers' attack, strike back for 3-0 win 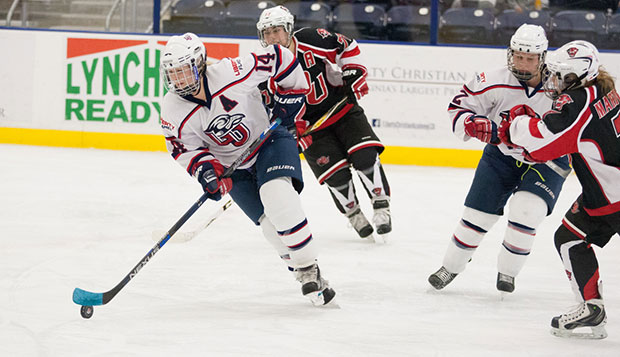 A slow start by Liberty University's top-ranked ACHA Division I women's hockey team, and some rough play and penalties against the Lady Flames kept Friday night's contest against No. 14 Davenport at the LaHaye Ice Center competitive.

"Rosie got some pretty decent saves in the net," Lady Flames Head Coach Paul Bloomfield said. "A couple times we dropped the puck and left her wide open and she recovered well.

"Obviously, the win's important and I'm glad we got it (but) I didn't think our girls played as well as they're capable of," he added. "We cycled and I felt like we controlled a lot of the game, but we just couldn't capitalize. The goalie was a decent goalie, but we shot a ton of shots into her."

After a scoreless first period, Liberty finally got on the scoreboard with a power-play goal midway through the second. With 9:25 remaining, senior forward and alternate captain Catherine Burrell received a pass from senior forward and head captain Carrie Jickling and unleashed a shot from the left circle that sneaked past freshman goalie Karley Ferguson into the back of the net.

"It was good to capitalize off the power play," Burrell said. "That really helped."

The Lady Flames knew what kind of physical play to expect from Davenport, a team they defeated 8-1 on Nov. 20 in Grand Rapids, Mich.

"We just try to keep our cool," graduate forward and alternate captain Nikki McCombe said. "If we're frustrated, we try to channel that and stay disciplined, just play clean hockey, work hard, play defensively and protect our end. We've got to get off to a better start, but all in all, it was a good game."

Liberty put the game away with two third-period goals, the first at the 14:21 mark when Burrell skated behind the Panthers' cage and dished a short backdoor pass to Jickling, who lifted a point-blank chip shot over Ferguson into the top right corner of the cage for a 2-0 advantage.

"Once our team gets a cycle going and gets into the flow and the speed of the game and gets our chemistry going, I think we're unstoppable," Burrell said. "It just took a little while tonight."

Then, with 2:27 left in regulation, Burrell distributed her second assist, sending a beautiful pass from the top of the right circle through the crease to sophomore forward Chelsey Greenwood, who one-timed it top shelf for the final score.

Libery hosts Davenport in Saturday night's rematch at LaHaye, with another 7 p.m. faceoff. Down to their last five games of the regular season — including a pair against No. 2 Adrian next weekend at home — the Lady Flames hope to extend their six-game winning streak into the National Championships in early March, when they will look to defend their title.

"We need to carry the momentum from this game into (Saturday) night's rematch and keep our focus before hosting Adrian next weekend," Burrell said. "Adrian's going to be our biggest competition at nationals besides Miami of Ohio, so it's important we play them well in our last two home games of the season before then."