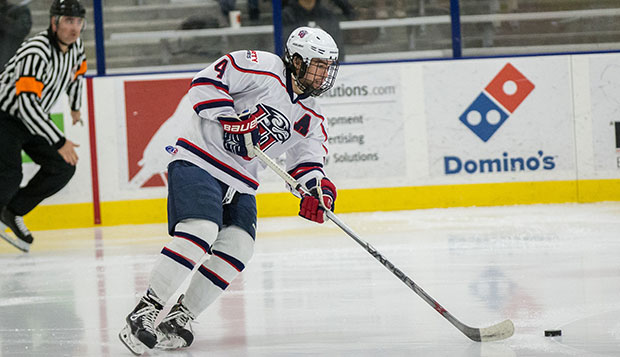 Tuesday night's 3-2 victory in its annual showdown with state rival Virginia Tech turned out to be a much more competitive battle than expected for Liberty University's ACHA Division I men's hockey team.

In their first game of 2016 in the LaHaye Ice Center, the Flames (11-13-1) outshot the Hokies 37-26, and were the more physical team, but let their guests stick around much longer than Head Coach Kirk Handy would have liked.

Virginia Tech goalie Tanner Jones stopped 33 Liberty shots to be exact, but couldn't keep the deciding goal out of the net, the only score of the pivotal third period.

The Flames jumped on top of the Hokies just 56 seconds after the opening faceoff when senior defenseman Steven Bellew made a fantastic move through the left crease before finishing with a backhanded shot past Jones for an unassisted score.

Virginia Tech tied it at the 15:00 mark when Filipe Rodriguez one-timed a feed from behind the end line from fellow forward Pat McKiernan, knotting the contest at 1-1. Liberty reclaimed the lead in the final 2:36 of the first period when senior forward Tyson Street took an exchange from freshman forward Zechariah Roberts behind the net and squeezed the puck between the left post and Jones' blocker.

Tech nearly leveled the contest on a two-on-one opportunity at the end of the first, but Flames graduate goalie Cary Byron fell to his back to save a shot by Hokies forward David Sachille. Liberty generated a few early chances in the second, one off a steal on its own end by freshman defenseman Jackson Giammona. He played the puck ahead to junior forward Chase Harris who played it back to Giammona for a shot from the left side saved by Jones at the 13:00 mark.

Moments later, Liberty junior forward Robert Ward, who leads the Flames with 20 assists, started a fast break and played the puck back to freshman defenseman Zane Schartz for a shot and a rebound by junior forward Grant Garvin, both blocked by Jones.

Seconds after extinguishing a Flames power play, Virginia Tech struck back to tie the game at 2-2 with 7:15 left in the second on a short fast break counterattack from the Liberty blue line. Byron blocked Rodriguez's shot launched from the right circle but couldn't stop Hokies forward Doug MacDonald's rebound as he crashed into the cage on the follow.

The Flames' game-winner came just seconds after their final power play started, following a slashing call against Rodriguez with 13:45 left in the third. Ward sent the puck across the slot to Schartz whose shot from the top of the right circle glanced off Garvin right to Harris who put it away from in the right crease.

"Our power play came through tonight and was able to execute there," Handy said. "There was some resiliency in the third period, which we like to see. In the third period, we did a lot of things right. It wasn't our best night, but I'm confident in the group in there. It's a game we're going to learn from and move on. We'll come back to practice (Wednesday) and be ready to go this weekend."

Handy and his coaching staff made it clear in the post-game locker room address that the Flames must raise their level of intensity and overall play as the season approaches its final stretch, with a trip to their ninth ACHA DI National Championships in the past 10 seasons on the line.

"We've got seven games left and we're going to have to play each one like it's the championship game," Handy said. "We're going to focus on our next game and continue building from there. We're confident as a coaching staff we'll be ready to go Friday night in Delaware. That's where we're putting our attention now. We can't change what happened tonight. We have to move forward."