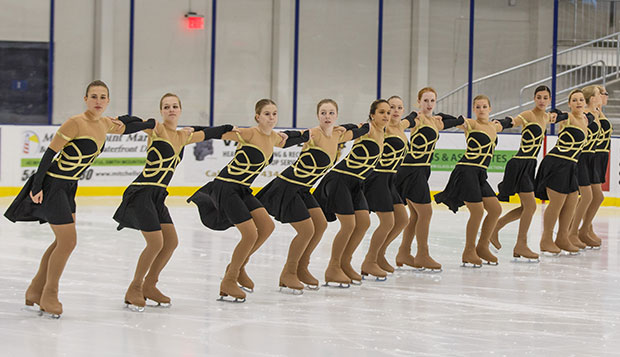 The Lady Flames will be one of nine teams competing in the Open Collegiate division, in a group that starts at 9:09 a.m. Saturday. Other competitions will take place Friday through Sunday at the Richmond Coliseum.

Liberty narrowly missed an opportunity to move up to the Collegiate division this season, which would have made it eligible to qualify for the United States Figure Skating Collegiate Nationals.

"There are a number of challenging teams still competing at the Open Collegiate level this season that will be here this weekend, including Princeton, Cornell, Syracuse, and Boston College," Payne said.

After competing at the 20th annual Dr. Porter Synchronized Skating Classic in Ann Arbor, Mich., in early December, the Lady Flames enjoyed a second opportunity to showcase their routine, featuring a 1920s Great Gatsby theme, at the seventh annual PraiseFest on Dec. 13 at the LaHaye Ice Center.

Payne hopes to use this weekend's competition as a springboard to next fall, when Liberty will again test for promotion to the Collegiate division.

"The team looks very good and I'm confident we will be able to medal, assuming our skate is clean," she said. "We want to be able to utilize this program at the collegiate level next year, when we will only lose three seniors and will be gaining between four and seven freshmen skaters," who are currently testing at the pre-juvenile level or above.