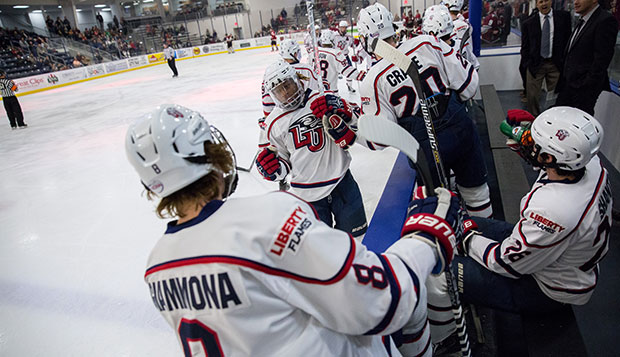 The Flames will play their first game at the LaHaye Ice Center since Dec. 12 when they host Virginia Tech on Tuesday at 7 p.m.

Before heading to Delaware for this weekend's series against the Blue Hens, Liberty University's ACHA Division I men's hockey team will make its 2016 home debut with a single game against in-state rival Virginia Tech on Tuesday night in the LaHaye Ice Center.

Despite being swept in back-to-back series at No. 2 Stony Brook and No. 7 Ohio to start the second semester, the Flames actually moved up two spots in last week's 14th ACHA DI rankings — to No. 14 — before having their home series against Michigan-Dearborn cancelled by snow.

If it can maintain that ranking for the final poll to be released next month, Liberty would be in position to receive its ninth bid in the past 10 seasons for the March 3-8 ACHA DI National Championships near Chicago, which will include seven autobids (six conference champions and host Robert Morris) in the 20-team field.

Liberty scouting report: Senior forward and alternate captain Danny Logan has ignited the Flames' offense with 11 goals and 15 assists for a team-high 26 points, followed closely by junior forwards Robert Ward (5G, 20A) and Grant Garvin (team-high 14G, 10A). Freshman defenseman Zane Schartz (5G, 17A) has also contributed offensively and played well on the power play, scoring three of his goals while on a man advantage.

Virginia Tech scouting report: The Hokies are led by goalie Tanner Jones, a Mid-Atlantic Collegiate Hockey All-Star Game selection last year, who has posted an 11-7 record with a 3.08 GAA and 91.6 SP this season.

Virginia Tech's attack, which has outscored opponents by a 76-72 margin this season, is sparked by forwards Tyler Nolan (12G, 11A) and Felipe Rodriguez (9G, 9A) and defenseman Peter Veltri (8G, 13A).

Coaches: Kirk Handy is in his 16th season as Liberty's head coach with an overall record of 343-153-20. Joe Mullen, who guided the Hokies to their first ACHA Division II tournament in 2012, is in his fifth season as head coach and has a combined record of 75-54-5.