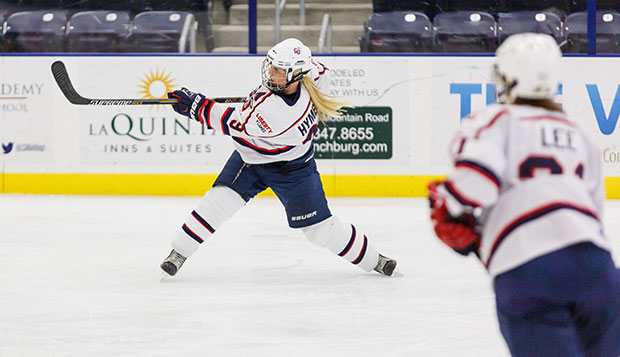 Top-ranked, defending national champion Liberty University's ACHA Division I women's hockey team converted on both of its power-play opportunities and completed its sweep of fifth-ranked UMass, with a 5-2 triumph, Saturday night in the Mullins Center.

Lady Flames senior forward and head captain Carrie Jickling, who ranks fourth in the ACHA Division I in scoring (16 goals, 16 assists), netted the game's first goal just over two minutes after the opening faceoff. She put away the first of two assists from senior forward and alternate captain Catherine Burrell, who ranks second on the team and seventh in the nation in scoring (10G, 18A).

However, UMass tied the contest at 1-1 with 46 seconds left in the first period.

"We started the first period playing very well before allowing them to tie it back up," Liberty Head Coach Paul Bloomfield said. "We came back in second period and shook the dust off and came on strong in the third period, as we normally do."

Chelsey Greenwood scored the game-winner on a power play with less than a minute and a half elapsed in the second period, finishing feeds from freshman defenseman Kjristin Hoberg and Burrell, before fellow sophomore forward C.J. Tipping extended Liberty's lead to 3-1 four and a half minutes later off an assist from senior defenseman Maddie Fischer.

"Maddie was playing on the other end and C.J. came off the bench and Maddie saw her and sent her the puck up the center of the ice," Bloomfield said. "She charged the net and scored a really nice goal, one-on-one with their goalie."

Toward end of the second period, Hutton stopped a one-on-one breakaway by a UMass forward with a spectacular save.

Tipping opened the third-period scoring exactly three minutes after the faceoff, assisted by Greenwood, before the Minutewomen cut the deficit to 4-2 with 11:10 remaining in regulation. Finally, with the Lady Flames on their second power play, Hoberg tipped in the fifth goal off assists from junior forward Courtney Gilmour and Tipping with 4:09 to go.

"There were only four penalties the whole game, two on each side," Bloomfield said. "I feel good about our power play, and our penalty kill's good, too."

Liberty returns home for two games next weekend at the LaHaye Ice Center, Friday and Saturday at 7 p.m. against Davenport, before hosting second-ranked Adrian College the following weekend and concluding the regular season Feb. 13-14 at Penn State.