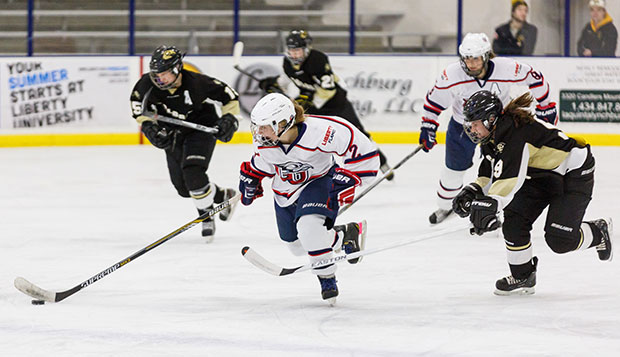 Liberty freshman Lauren McDonald starts a breakaway in a game last week against Colorado at the LaHaye Ice Center.

After a scoreless opening stanza, Liberty University's ACHA Division I women's hockey team allowed the University of Massachusetts to score first in both the second and third periods before responding with four unanswered goals in the second and two more in the third for a 6-2 triumph, Friday night in the Mullins Center.

The Lady Flames (11-2-1) entered the contest ranked No. 1 for a third consecutive ACHA Division I poll while UMass (11-4-2) came in ranked fifth. The team shot totals were similar, with Liberty only holding a 32-30 edge on the Minutewomen while outscoring them by a three-to-one margin.

"It was a good game," Lady Flames Head Coach Paul Bloomfield said. "We started out really, really slow after the long bus ride. But I felt once we got our wheels under us, we played pretty well. We didn't play very well in the first period which hurt us. We started to scramble a little bit, but in the second period, we started to roll."

Lady Flames freshman Kelly Hutton, who ranks first among ACHA DI goalies with a 0.83 goals-against average and a 94.3 save percentage and is tied for third with three shutouts, secured her sixth win in as many starts by making 28 saves.

She allowed UMass to score in the opening minute of the second period before Liberty answered exactly a minute later on a goal by Jickling off assists from Burrell and Gilmour. With 11:46 left in the period, sophomore forward C.J. Tipping netted the game-winner assisted by graduate forward Nikki McCombe and sophomore forward Chelsey Greenwood.

Burrell stretched Liberty's lead to 3-1 midway through the second period off an assist from senior defenseman Madison Fischer before freshman forward Kjristin Hoberg made it 4-1 in favor of the Flames when she finished off assists from Burrell and senior defenseman Brittany Hymers on a power play 1:48 before the second intermission.

The Minutewomen got a goal back with 15:42 left in the third, trimming the deficit to 4-2, before Gilmour scored twice in a two-minute span late in the contest to seal the victory. Jickling and Greenwood assisted Gilmour on the first before she finished a feed from Burrell with a final goal off the power play.

Liberty and UMass ranked sixth and seventh in the nation, respectively, with a 22.9 and 22.8 power play conversion percentage while the Lady Flames' penalty kill average of 96.2 percent ranked 11th. In a game that included 13 penalties (nine by UMass and four by Liberty) the Lady Flames capitalized on two of their power plays and didn't allow the Minutewomen to score with a player advantage.

Bloomfield gave the game puck to Tara Lee, a freshman defensive transfer from Alaska playing in her fourth game.

"She really did a great job," he said. "She kept her feet moving and played pretty physical. She was gritty, grinding the puck down, and was able to get physical against a pretty physical team."

The two teams return to the ice on Saturday for a 6 p.m. faceoff to start the rematch.