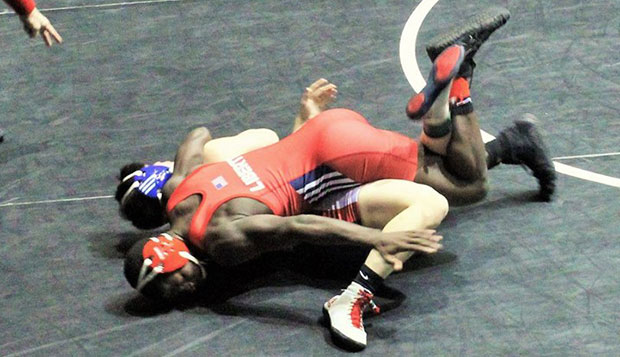 The Flames, seeded second in the tournament (which features nine of the top 10 ranked teams in the nation) and ranked fifth in the latest NCWA rankings, steamrolled over 24th-seeded Clemson, 47-6, before routing No. 9 Penn State and No. 15 Temple by identical 46-10 counts. They racked up 13 pins in the three matches, including six against PSU's club team.

"Our first match was awfully one-sided and we really were pretty dominant," Liberty Head Coach Jesse Castro said. "In our second and third matches, we wrestled really well against some pretty solid teams."

Freshman 125-pound wrestler Dell Ngonga and junior 174-pounder Josh Ferenczy were the only two Flames to go 3-0 on the day as Castro platooned several of his starters and backups at various weight classes.

"Dell Ngonga has been a key momentum builder for us," Castro said. "He's stepped up and done really well along with (141-pound sophomore) Logan Smith and Josh Ferency. The other teams don't have a lot of depth in terms of backups. They're going to wrestle five or six times and that's a lot of strain on the body. For the most part, I've been utilizing my backups and some of them are winning some key matches and most of those that are losing are doing a good job of not getting pinned."

Saturday's four quarterfinal matches, set for noon, will pit top-seeded Central Florida against No. 8 Florida; No. 2 Liberty against No. 7 Penn State DuBois; No. 3 Grand Valley State against No. 6 Emmanuel College; and No. 4 Apprentice School against No. 12 UMBC.

"We're going to have some tough matches tomorrow in the quarterfinal matches and hopefully the semifinals," Castro said. "Penn State DuBois is solid but I think we match up pretty well with them. It'll be a good match."

"I don't think the seedings are all that accurate," Castro said. "Central Florida got such a great position. Emmanuel College, which is an NAIA team transitioning to NCAA Division II, got seeded sixth which put them on our side of the bracket. They're conceivably the No. 2 or 3 team. Seed-wise, to be honest, we're probably four. But we're wrestling to win this thing."

If the Flames do wind up meeting Emmanuel in the semifinals, it will be a similar matchup as the 2012 NCWA National Duals final against Lindenwood, which won the NAIA national championship the year before and, like Emmanuel, was transitioning to the NCAA level.

Regardless of the outcome, it will be a good tune-up for the Flames as they seek to defend their NCWA National Championship title.

"We're on the right track," Castro said. "We've got to get in better shape. Christmas break didn't help us at all, but this is a good preparation for us going into the NCWAs. Most of our competition this season has been against NCAA teams which has always helped us. I can see it. When we're wrestling some of these NCWA teams, the strength of four schedule shows up because we've been in more hard-fought than some of these other teams."