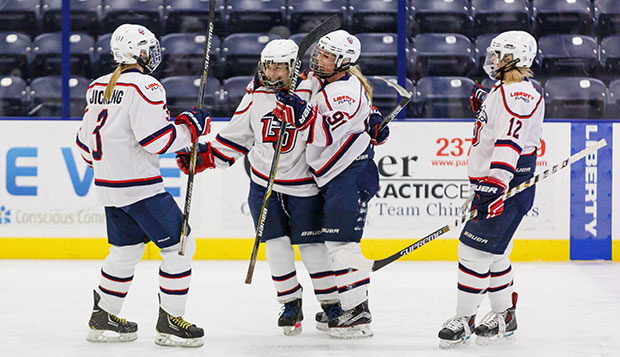 The Lady Flames celebrate a goal in last Thursday's game against Colorado at the LaHaye Ice Center.

The top eight teams in the final ACHA DI rankings, due out the week of Feb. 21, will make up the field for the ACAH DI National Championships.

"I'm glad we're where we are, but it doesn't really matter to me," Lady Flames Head coach Paul Bloomfield said. "The biggest determinant in the end is where we end up before the last ranking. That's the one that determines who we play."

Liberty is ranked first ahead of No. 2 Adrian College, which will visit the LaHaye Ice Center on Feb. 5-6, No. 3 Miami of Ohio, the 2014 national champion that the Lady Flames defeated in last year's final, and No. 4 Grand Valley State. Liberty forfeited the opener at Grand Valley on Nov. 21 before winning the Nov. 22 rematch with the Lakers, 4-0.

The Lady Flames (10-2-1) will brave Winter Storm Jonas and leave Thursday at 4 p.m. on their trip to Amherst, Mass., to face fifth-ranked Massachusetts, Friday at 8 p.m. and Saturday at 6 p.m. They will stay in upstate Pennsylvania on Thursday before traveling to northern Massachusetts on Friday.