Handy looks back at season's first half, ahead to future 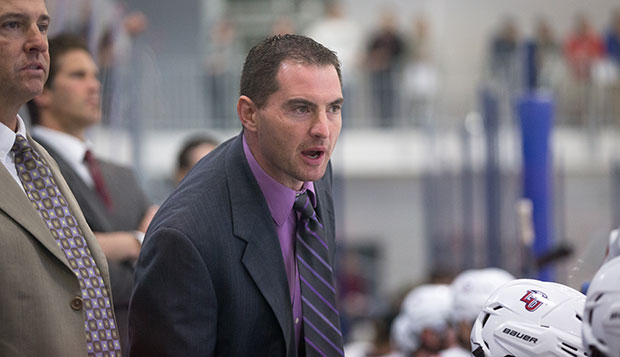 Kirk Handy is in his 16th season at the helm of Liberty's hockey team, and is the face of the program as much as hockey is the engine of the Club Sports department.

Liberty University ACHA Division I men's hockey Head Coach Kirk Handy, who was recently named athletic director for Club Sports (replacing his former title of senior director of campus recreation), recently sat down with Club Sports Video Coordinator Gabe Henderson to talk about the Flames' season to date and prospects of advancing to their ninth ACHA DI National Championships in the past 10 years.

"We have to get back to playing every game like it is a game to get us into the national championship," Handy said. "Every game matters and we can't overlook anyone. We're most concerned about who we are as a team and about improving on our game every time we're out there. That's the most important part for us. Are we getting better? That's our focus."

(Liberty, ranked No. 14 in this week's ACHA DI poll, had Friday's and Saturday's games against 11th- Michigan-Dearborn at the LaHaye Ice Center canceled due to the impending winter storm that could bring more than a foot of snow to the area. It will host Virginia Tech on Tuesday at 7 p.m.)

Handy and Henderson also discussed a variety of other topics, including Handy's background as a player in the late-1990s and his transition to coaching the team for the past 16 seasons and how the hockey program has become to Club Sports what the Flames Football program is to Athletics.

"It's really been the litmus test for us in Club Sports, the one we've wanted to experiment with something new," Handy said. "We've usually used hockey as a Guinea pig for that, for academics, for athletic training, and all the other things we've incorporated into our Club Sports program. I'm very proud of what the university has done. President (Jerry) Falwell and Senior Vice President Lee Beaumont have been huge driving forces behind the whole Club Sports department. It's been key for us being able to be a part of it and to be the part of Club Sports that has been the driving engine."