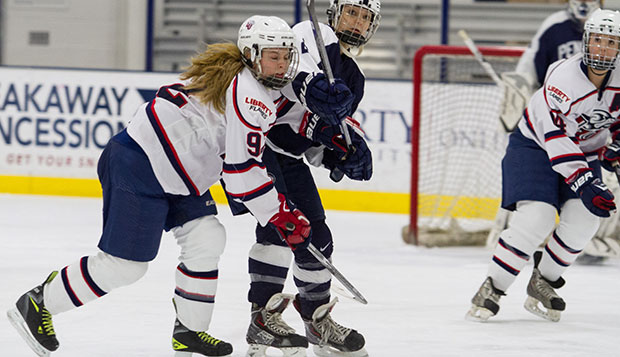 A slow start Sunday morning let the Lady Ice Lions of Penn State sink their teeth into Liberty University's ACHA Division I women's hockey team, but a blistering response in the second and third periods showed the Lady Flames in true form, ready to defend last season's national championship. Liberty's 8-4 home victory at the LaHaye Ice Center puts the Lady Flames (10-2-1) at 10 wins on the season, without a face-to-face loss since September.

Penn State (3-12-1), ranked No. 15, came out aggressive to open the game, countering the top-ranked Lady Flames' opening attack by breaking it back to the other end of the ice where Lions freshman forward Meghan Miller scored off an assist from senior forward Darby Kern less than a minute in.

From there, the defending champs could not swing the period in their favor. Though Liberty's defense buckled down enough to prevent Penn State from getting as many good shots as it earned (the Lady Ice Lions kept the puck in Liberty's zone for much of the time and managed to fire off 12 shots on goal), keeping the shots relatively even (Liberty managed 11 shots on goal), Liberty could not seem to connect in State's zone. At one point, LU's Clarissa Tipping, a sophomore forward, weaved her way through a pack of Lions defenders to take a shot at senior goalie Allyssa Long, only to be denied at the net. A few minutes later, Liberty mounted an assault, only to have three shots blocked at close range.

Liberty's early troubles were not over, even after killing the game's first penalty. Penn State would attack Lady Flames sophomore netminder Rosie Kelly and find the back of the net for a 2-0 lead which the Lady Ice Lions would ride into the first intermission. Claire Gauthier got the goal on a rebound from Kelly Watson.

Coming in off the first intermission, Liberty showed signs of life not evident in the opening frame.

With the Lady Flames' relentless pressure on Long early in the second, Penn State might have found solace in going up a man after a Liberty penalty. But Liberty dominated the puck even shorthanded, and a quick steal, fake, and fire by Carrie Jickling put Liberty on the board at 18:19. The Lady Flames kept up the assault and the speedy freshman Lauren McDonald zipped through the one-up (both on the ice and on the board) Lions, slapping the puck at least three times into the goalie before Long held on to maintain, for then, the advantage.

Minutes later, McDonald fed Chelsey Greenwood from the center of the right circle, setting the sophomore up to flip it in and tie the game at 12:22.

Catherine Burrell answered right back just about 30 seconds later off an assist from Jickling.

Liberty kindled its newfound life and took its first lead of the game with 6:06 left when Burrell slammed home a rebound after a long shot came in from the left circle.

Not willing to back down, Penn State locked the game back up with 14 seconds on top of four minutes left in the second period. Jackie Saideh planted in the rebound of a Gauthier attempt.

As Lynchburg saw its first snow of the season outside, Liberty rained a flurry of shots on Long to keep Penn State defending for much of the game's final period.

A rapid display of teamwork kept the puck out of Penn State's possession early, allowing Liberty to seize advantage. Nikki McCombe found McDonald, who slipped the puck past Long, in front of the net to put Liberty up for good with 18:49 remaining.

Not 10 seconds later McDonald blasted off, leaving a trail of bodies in her wake as she blazed toward Long and connected high right to pad the Liberty lead.

The shots kept coming, hard and fast, as Penn State's intensity waned. Junior forward Courtney Gilmore displayed some fancy stick work as she shook a defender and came in hot to put the Lady Flames up 7-4 at 14:19.

Clarissa Tipping blasted a dart through the five hole to double up and, eventually, send home the Lady Flames' guests. Even as the clocked ticked down Liberty's offensive did not relent, save for a late and unsuccessful scramble by the Lady Ice Lions.

Liberty head coach Paul Bloomfield was less than pleased with how his team started out.

"We changed up our lines after the first period," he said. "We went to our heavy hitters."

Though he said it is nice to be able to rely on veteran leadership, Bloomfield added he expects more out of his younger blood, hoping to get four years of championship-caliber hockey out of them.

With the third ACHA DI rankings due out this week, Liberty, despite skating to some rocky wins with Sunday's contest and a preceding sweep of Colorado, does not seem in danger of losing its No. 1 standing.

"It doesn't matter where we land (in the rankings)," Bloomfield said. "It won't change how we play."

Liberty looks forward next to a two-game road series (Jan. 22-23) against UMass, ranked fifth and which Bloomfield knows is an experienced squad. He expects his team to have sharpened its game, dulled by a long break, after these recent games and a week of practice.