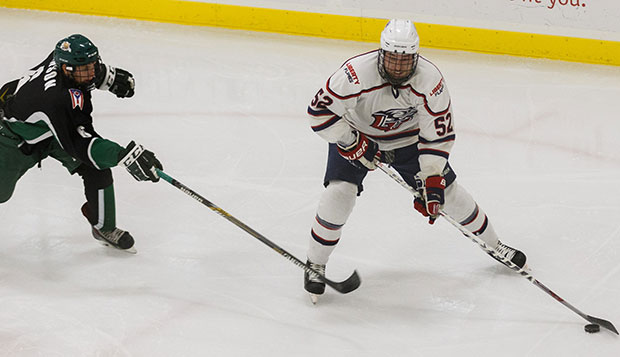 In another fiercely competitive showdown between Liberty University's ACHA Division I men's hockey team and host Ohio, the seventh-ranked Bobcats took nearly twice as many shots and doubled up the 16th-ranked Flames, 4-2, Saturday night at Bird Arena.

The loss was Liberty's fourth in a row to start the second semester and sixth straight in its rivalry with Ohio (23-4-1), which has eliminated the Flames from two of the past three ACHA Division I tournaments.

"We had a solid game tonight, a lot better game than we played Friday night," Flames Head Coach Kirk Handy said. "We worked on D zone coverage this week in practice and it was evident. We were executing in the D zone. That was the kind of a game we expected. It was a close game and these are the battles you're going to have against teams like Ohio. It comes down to us making a couple plays at key times."

Senior defenseman Steven Bellew had exceptional assists on the Flames' first two goals, including a wraparound pass from behind the left side of the goal that freshman forward Owen Harris redirected past Ohio goalie Aaron Alkema on a rebound.

"Bellew played his best weekend of the season, with back-to-back games where he was solid for us," Handy said. "Owen went to the net and made a super nice play. He's very creative around the net."

That gave Liberty (10-13-1) a 1-0 lead with five and a half minutes left in the first period before Bobcats forward Matthew Hartman tied it up in the final 45 seconds with a quick score off a faceoff in the Flames' defensive zone.

Early in the second, Ohio junior forward Patrick Spellacy set up senior forward Michael Harris cutting into the slot for a shot into the upper left corner of the cage. However, the Flames responded moments later when Bellew faked a slap shot and sent a short feed to freshman forward Zechariah Roberts on the left side where he lifted it over Alkema's right shoulder, tying it at 2-2.

"Bellew made a fantastic play to get it to him and Roberts found the net," Handy said.

Liberty started the third period on the tail end of the game's first power play but was unable to net the equalizer. Later in the third, with the teams playing three-on-three hockey following roughing penalties to both sides, Hartman set up Bobcats freshman Matt Rudin for the final score, padding Ohio's lead to two goals.

The Flames ended the game on a five-minute power play and pulled Pinel for the final minute for a six-on-four advantage, but could not cut into the deficit as the Bobcats, who feature the nation's top defense, shut Liberty out over the final 30 minutes.

"We had our chances," Handy said. "Our guys battled hard and played a solid game. We had lots of pressure on them but they kept it out of the back of the net. We liked the effort, the defensive zone coverage. This weekend series was a good building block for us with Michigan-Dearborn coming in next week."

The Flames return to the LaHaye Ice Center for 7 p.m. games Friday and Saturday against the Wolverines before hosting Virginia Tech on Tuesday, Jan. 26, also at 7 p.m.

"We're excited to get back home," Handy said after being away from LaHaye for more than a month and spending the first two weekends of the new year on the road. "We're expecting a good weekend after a good week of practice."