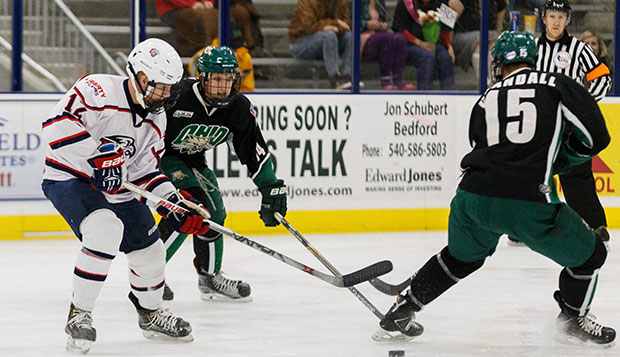 Flames freshman forward Owen Harris (12) fends off a couple Bobcats in their first meeting, Oct. 31 at the LaHaye Ice Center.

After digging itself a 2-0 deficit in the first period, when it was outshot 23-2, Liberty University's ACHA Division I men's hockey team rallied to tie Ohio at 3-3 for 20 minutes late in Friday night's opener at Bird Arena before finally losing its fifth straight meeting with the Bobcats, 6-4.

Seven minutes after the opening faceoff, freshman forward Bryan Lubin started the scoring for Ohio, which wound up outshooting the Flames 50-20 for the contest.

Junior goalie Matt Pinel played a stellar game between the pipes for the Flames, making 46 saves as the seventh-ranked Bobcats (22-4-1) rattled Liberty's cage.

"Matt played well for us in net, especially in the first period," Flames Head Coach Kirk Handy said. "He played a very strong first period and kept us in the game all night, which is all you can ask."

With Flames junior forward and top goal-scorer Grant Garvin sidelined with a game suspension after checking Ohio junior defenseman Graham Harwood into the boards, the Bobcats capitalized late in the ensuing five-minute power play on a goal by junior defenseman Alex Vazquez.

Early in the second period, Zac Hayes, who joined the team for the second semester, scored his first goal as a Flame, taking an assist from freshman defenseman Jackson and beating Bobcats goalie Aaron Alkema to pull Liberty within 2-1.

"Zac had a really strong game for us tonight," Handy said. "He scored a goal and was strong on the penalty kill for us. He had a physical presence and played a very solid game."

Ohio junior forward Joey Breslin padded Ohio's lead back to two goals at 3-1 before Logan trimmed the gap to 3-2 by putting back a rebound of a shot from the perimeter off the stick of freshman defenseman Zane Schartz on a power play.

Coming off a penalty kill, and a last-second save off the skate of Pinel, freshman forward Zechariah Roberts took advantage of Vazquez mishandling the puck at center ice to steal it back and start a breakaway, tying the contest at 3-3.

"That was a really nice shot by Roberts," Handy said, noting Shartz and Hayes were credited with the assists. "He went in on the breakway and finished in the five hole."

Moments later, after a couple missed putback attempts by the Bobcats, Giammona made a critical stop of a seemingly surefire rebound shot by junior forward Liam Geither, preserving the tie, which lasted for 20 minutes.

With just over seven minutes remaining in regulation, Geither gave the Bobcats a 4-3 lead that they would not relinquish and freshman forward Matt Rudin extended it to 5-3 two minutes later, but the Flames weren't finished. With 1:06 to play, after the Flames pulled Pinel for the man advantage, Logan netted his second score off an assist from freshman forward Owen Harris.

However, that was as close as they would get as Breslin scored an empty-netter in the closing minute.

"We battled back to make it a one-goal game and we feel confident going into Saturday night's game," Handy said. "We've got to make some adjustments and be ready to go again."

Puck drop for the rematch is set for 7:30 p.m. and it will be webcast live on Ohio's website.