Flames travel to Ohio for a tough test against ACHA nemesis 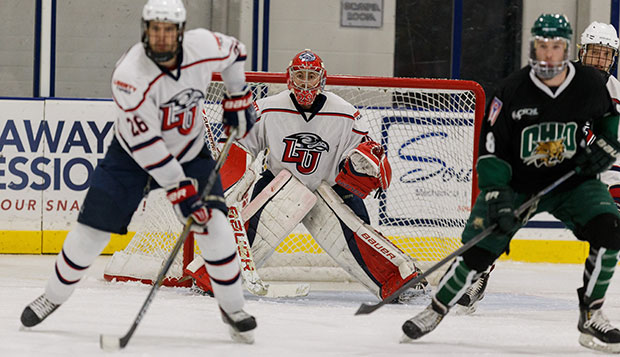 The new year didn't begin the way Liberty University's ACHA Division I men's hockey team had planned this past Saturday and Sunday on Long Island, N.Y., as Stony Brook snapped the Flames' six-game winning streak with decisive 7-2 and 10-3 setbacks.

However, despite being shorthanded for this weekend's series at Ohio University, Head Coach Kirk Handy is optimistic his young squad can get back on track, even against a Bobcats squad that has eliminated the Flames from two of the past three ACHA DI National Championships.

"We're out to prove that we're a contender," said Handy, whose team dropped one spot to No. 16 in the first ACHA DI ranking of 2016. "Ohio's Bird Arena is a tough place to play but it's going to be up to us when we go up there to execute in a way that makes us successful. I have confidence in our ability to come out on top."

Of Liberty's 12 losses this season, including a 7-6 shootout loss Oct. 23 at top-ranked, 2013 ACHA Division I national champion Minot State, 11 have come against teams ranked in the top seven.

Ohio entered the spring semester ranked No. 7, after rising to No.1 early in the fall when it got out to an 8-0 start. The Bobcats overcame a 2-0 deficit to down the Flames 5-2 in the first round of last year's national tournament near Cleveland after scoring three power-play goals in the third period to pull away for a 7-4 triumph in the second round of the 2013 event outside of Chicago.

Liberty scouting report: After the Flames yielded 17 goals in two games at Stony Brook, Handy and his assistant coaches have spent the most time this week in practice on shoring up their defense, which has allowed 93 goals in 22 games (4.2 per game).

"Our defensive zone is where our focus has been and will continue to be," Handy said. "We can always improve on special teams, for sure, our power plays and penalty kills. We want to make sure we execute in our D zone and cut down the number and quality of opportunities that we've been giving up."

Junior goalie Matt Pinel (2-5, 4.12 goals-against average, 88.1 save percentage) allowed only one goal in the third period of Sunday's game at Stony Brook. He made his first start in eight games in that contest, but was pulled for graduate Cary Byron (7-4, 3.98 GAA, 89.8 SP) after allowing three goals in the first five minutes.

"We have confidence in both of our goalies to get the job done," Handy said.

Ohio scouting report: The Bobcats are 14-2-1 at Bird Arena this season. They split last weekend's series at No. 2 Lindenwood, winning the opener 4-2 and losing the rematch 4-3.

Coaches: Kirk Handy is in his 16th season as Liberty's head coach with an overall record of 343-151-20. Sean Hogan is in his second season at Ohio and now has a career mark of 179-128-14 after previously coaching three seasons at Arizona, going 43-66-2 with the Wildcats, and four seasons at Oakland (Mich., 88-50-7). He guided the Golden Grizzlies to an ACHA DII national championship in 2006 with an overtime win over the Flames in the final before both teams moved up to the Division I level the next season, when Oakland claimed an ACHA DI crown.