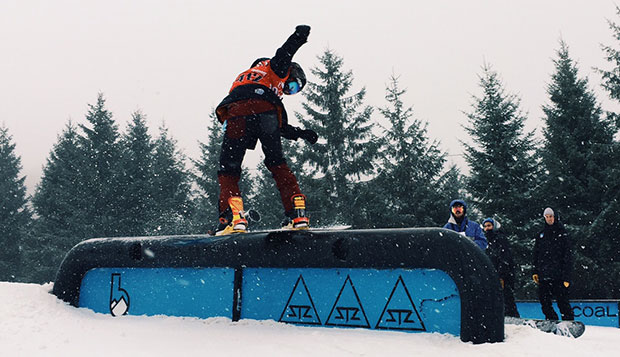 Liberty junior captain Brendan McHugh performs a trick in the Rail Jam, which he won Saturday and placed third in Sunday.

In its first United States Collegiate Ski & Snowboard Association (USCSA) event of the season, Liberty University's men's and women's ski & snowboard teams' performances in the Rail Jam were a cut above those of their Southeast Region competitors, Saturday and Sunday at Beech Mountain (N.C.) Resort.

In a field that included representatives from Appalachian State, Bridgewater College, East Carolina University, North Carolina State, James Madison University, and the University of North Carolina, Liberty's riders, who train at the Liberty Mountain Snowflex Centre, the only dryland resort or its kind in North America, swept the top individual placings in both the men's and women's ski and snowboard competition.

"It was a very impressive showing for our first competition of season," Flames Head Coach Ryan Leeds said. "All of the coaches were extremely proud of what we were able to accomplish this weekend. There were definitely things we saw that we can improve upon, things I'd like to tweak and little mistakes that can be fixed, and the athletes are already thinking through those things."

The Flames' men's snowboarders posted five of the top seven finishes out of 29 entries in Saturday's competition, paced by junior captain Brendan McHugh, the overall winner, and six of the top eight out of 18 riders on Sunday, led by sophomore Austin Santos, who tied with NC State's Duncan Nielander for first place. Santos and McHugh placed third on Saturday and Sunday, respectively.

He was also impressed with sophomore Nick Williams, who placed seventh on Saturday and fifth on Sunday in his first-ever competition, sophomore Matt Zeigler, who finished fifth and fourth, respectively, in his first competitions since surgery that kept him out of last year's USCSA national championships, and senior Chris Holt, who placed fourth and sixth, respectively.

"Isaac Shepard and Jonathan Wong really impressed the judges," Leeds said. "When I let one of them know they were both freshman, he was shocked."

Complete results are available on the USCSA Southeast website.

Liberty will train on snow at Wintergreen Mountain Resort over the next two weeks to prepare for its next competition at Appalachian Mountain near Boone, N.C., where its skiers and snowboarders will compete in another Rail Jam on Jan. 30 and skiercross and boardercross races on Jan. 31.