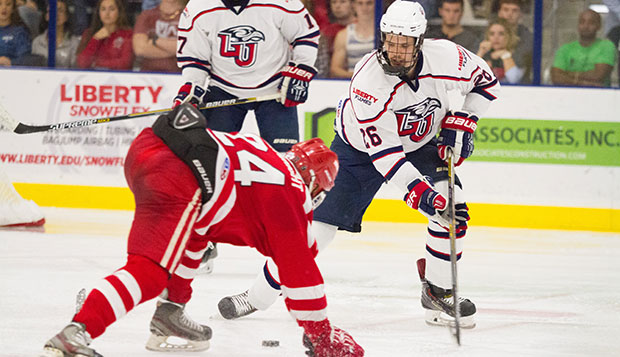 Unlucky bounces of the puck off a skate and the back of graduate goalie Cary Byron and a series of defensive lapses by Liberty University's ACHA Division I men's hockey team early in the first period and late in the second allowed fifth-ranked Stony Brook (20-2) to complete a two-game sweep of the Flames with a 10-3 triumph, Sunday afternoon at The Rinx on Long Island, N.Y.

Five second-period goals — including four unanswered in a span of four and a half minutes — all but put the game out of reach late in the second period, expanding the Seawolves' advantage to 9-3.

Liberty (10-11-1) outshot Stony Brook 16-13 in the first period, but trailed by a 4-1 margin, the same score as after the second period in Saturday night's opener.

The Seawolves needed just over five minutes to open a 3-0 advantage. Just a minute and a half after the opening faceoff, Stony Brook's Andrew Cetola won a faceoff in Liberty's defensive zone to Osowski, who sent a pass across the goal mouth back to Cetola, who redirected it inside the right post off his skate.

Junior Matt Pinel's first start since Nov. 14 was short-lived as Byron came in to replace him after wide-open, short-range wrist shots by sophomore defenseman Frank Sherding and junior forward Eddie Osowski in a span of 27 seconds boosted Stony Brook's lead to three goals at the 14:51 mark.

Liberty got one goal back two minutes later on the first of two scores by senior forward Danny Logan, on a wrist shot from the top of the right circle on transition off a backhanded feed from junior forward Robert Ward on the right side of the Seawolves' blue line.

But with 1:21 left in the first stanza, Stony Brook junior forward John Defeo was credited with a goal off an assist from Cetola on a deflected chip shot from behind the cage that bounced off Byron into the back of the net to make it 4-1.

Less than five minutes into the second period, Logan again cut the deficit to two goals when he converted a putback of a shot by Ward from the top of the right circle after freshman forward Owen Harris had sent Logan a pass from behind the net, setting up his initial shot.

The Flames were then given a golden opportunity to get back into the contest with a five-on-three.

"That was the turning point of the game when we were on that five-on-three power play and weren't able to convert," Liberty Head Coach Kirk Handy said. "We had a chance to make it a one-goal game and we weren't able to do that."

Stony Brook actually had the best quality chance on the Flames' power play when JT Hall's shorthanded shot off a breakaway glanced off the crossbar. Then, soon after completing the penalty kill, Osowski scored to make it 5-2 off assists from Cetola and freshman defenseman Frank Coscia.

With 7:24 left in the second, Ward received a long outlet pass from freshman defenseman Zane Schartz and dished a two-on-one pass to Harris who lifted his shot in the left slot under the crossbar to cut it to 5-3. But Coscia started Stony Brook's scoring surge off an assist from Hall just over a minute later and senior forward Matthew Gervasi sniped a shorthanded shot from the top of the left circle a minute and a half later before Hall scored back-to-back goals over the final four minutes.

For the game, the Flames and Seawolves both put 37 shots on net, but Stony Brook scored on better than 25 percent of its attempts while Liberty turned less than 10 percent into goals. Likewise, the host Seawolves went three-for-five on power plays while the Flames were zero for six.

"We didn't have it this weekend," Handy said. "It wasn't our weekend. I still believe in this group. We're going to learn from this and move forward. We'll watch some video and make some adjustments and get ready for Ohio. We need to be ready to go next weekend and we will be ready to go."

The Flames will look to exact a measure of revenge against the seventh-ranked Bobcats, who won their two games over Halloween weekend at the LaHaye Ice Center, when they travel to Athens, Ohio, for games Friday and Saturday at 7:30 p.m.