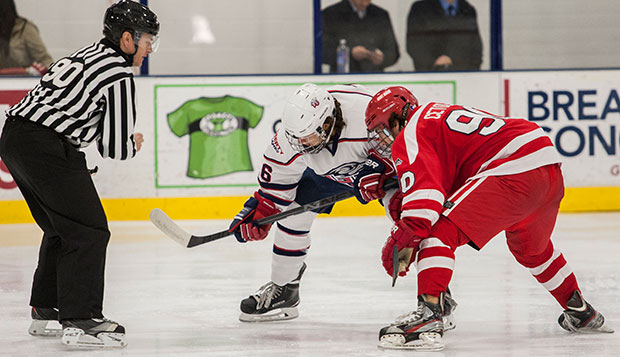 Stony Brook's ACHA Division I men's hockey team won nearly 75 percent of the faceoffs in Saturday night's game against Liberty University, including a pivotal one from the defensive end that it turned into a fast-break score in the closing minute of the second period, stretching its lead to 4-1.

"They dictated play to us and that's something that we have to turn around (Sunday)," Liberty Head coach Kirk Handy said. "We weren't a very tough team to play. We didn't have the pushback. We lost a lot of battles in front of their net tonight. We have to go back to winning the one-on-one battles. (Sunday's) a big day for us to show our resolve, show our fortitude."

Three and a half minutes into the second period, Liberty freshman defenseman Zane Schartz received a pass from junior forward Robert Ward and launched a wrist shot from along the left boards past Flames junior forward Grant Garvin — who screened Stony Brook goalie Derek Willms — into the top right corner of the cage, knotting the score at 1-1.

However, three and a half minutes later, after the puck went behind the net on a two-on-one break by the Seawolves, sophomore forward Chris Stemke caught Liberty graduate goalie Cary Byron out of position on a wraparound goal inside the right post.

"Cary battled for us tonignt, but we weren't able to give him a lot of support there," Handy said. "We didn't bring our A game tonight. It just wasn't happening."

Moments after Shartz narrowly missed a potentially tying putback on a Flames fastbreak, with Stony Brook seconds into a power play, junior forward Justin Lizalde redirected junior defenseman Dalton Gilbert's shot in the left slot under Byron but off the left post. Seconds before Liberty could complete the penalty kill, Lizalde sent a pass from the left end line to junior forward Eddie Osowski in the left crease where he lifted a wrist shot into the upper netting to give the Seawolves a 3-1 edge.

Then, 30 seconds later, Stony Brook junior forward JT Hall won a faceoff in the defensive zone and started a fast break, leaving the puck for senior forward Tyler Underhill at the top of the left circle before tapping in the rebound of his shot near the left post to make it 4-1.

Only a minute and a half into the third period, Stony Brook struck again as freshman defenseman Frank Coscia sent a backhanded through pass to senior forward Andrew Cetola who tipped it in for a 5-1 advantage. Later, Coscia put away Osowski's backhanded assist from behind the left post before Coscia capitalized on the Seawolves' seventh score in the right crease.

Liberty finally stopped Stony Brook's six-goal surge when sophomore forward Paul Lamoureux's shot off a faceoff assist from Garvin squirted past Willms from the left side of the left circle with 5:30 remaining.

The teams will meet again on Sunday at 3:40 p.m., with a live webcast available for free viewing.

"I have confidence in this group," Handy said. "We had a setback tonight, but it's a new day tomorrow and we're going to come out tomorrow and bounce back and do the things we weren't doing tonight, winning the one-on-one battles and playing a hard-fought game."