DII Flames open second half of season Saturday against WVU 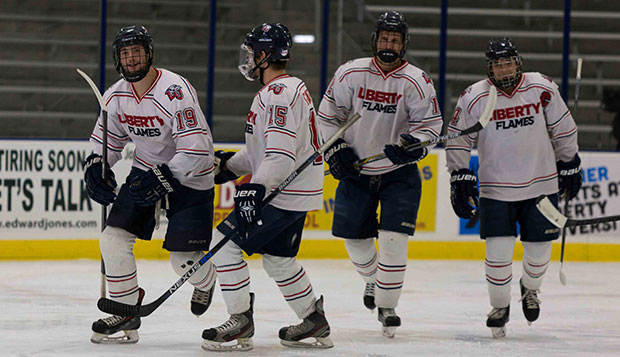 Liberty University ACHA Division II men's hockey Assistant Coach Mike Morrison spent some time this week talking with Club Sports Video Coordinator Gabe Henderson about the first-half success of the program, which is ranked No. 1 in the latest South Region poll and is looking to make a third consecutive trip to the ACHA DII National Championships.

Humility and team unity have been two key components in the Flames' 16-2 first-semester mark, including a program-record 13-0 start.

"To them, it's more than just a hockey game," Morrison said. "It's about the camaraderie, it's about the team atmosphere, it's about leading and helping each other. That's why they've been successful. The team is so cohesive this year."

Liberty hosts West Virginia this Saturday at 4 p.m. at the LaHaye Ice Center before traveling to the Berglund Center in Roanoke on Sunday at 2 p.m. to meet rival Virginia Tech in the second game of the best-of-three Battle of the Blue Ridge series.