Flames ready to prove they can battle ACHA's best in 2016 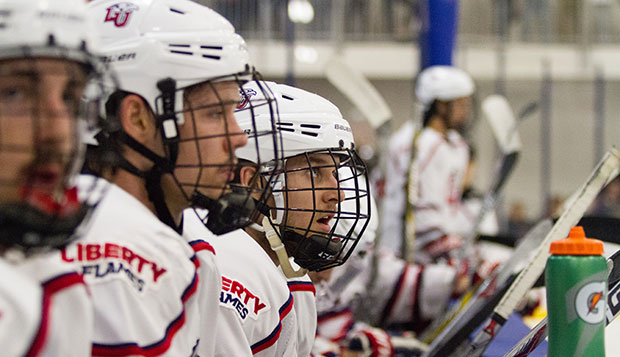 Liberty graduate defenseman Peter Shantz (left) and junior Chase Harris (center), who has shifted from defense to forward, watch from the bench during the Nov. 6, 2015, showdown with the Seawolves at the LaHaye Ice Center.

Since then, Liberty has won seven of nine games, capping the semester on a six-game winning streak. That raised the Flames' record above the .500 mark for the first time since their season-opening win at Potomac and their ranking back to No. 15 in the latest ACHA DI poll.

"We took some huge strides last semester to put that winning streak together," he said. "Guys have been digging deep and buying into their roles and our team identity has really started to take root. The big thing is the guys are understanding who we as a coaching staff want and need them to be on the ice."

Nine of Liberty's 10 losses in the fall semester — including a 7-6 shootout setback Oct. 3 against No. 1 Minot State — came against teams currently ranked in the top seven. This semester, the Flames play four of the five teams that dealt them those defeats — all but Davenport, which went 3-0 against Liberty — starting this weekend at Stony Brook on Long Island, N.Y.

"Our schedule's played into our favor last semester and this semester in that we play top teams night-in and night-out," Handy said. "Stony Brook's the fifth-ranked team right now and we're embracing the opportunity to go up there and build on our No. 15 ranking. We're most concerned not about wins and losses, but the process to build the team. We're really excited to see how our guys step up."

Senior forward and alternate captain Danny Logan and freshman forward Owen Harris are optimistic about what the New Year will bring, and confident the Flames can stage at least a couple upsets —against the Seawolves and at Ohio on Jan. 15-16 — to solidify their standing in the ACHA National Championship picture.

"It was nice having the three-week break, getting some rest to heal the body up, but I think everybody's looking forward to getting going in the second semester," Logan said. "We've got a tough week here, so it's going to be important that we can stay focused and get off to a good start."

"The older guys have really taken the younger guys under their wing," Harris added. "We're pretty confident in our game and that gives us the mojo to play well. It's going to take a lot of hard work and we've got to make the smart plays. But we have the talent, the strength, the speed, and the team chemistry to get it done this semester."

Freshman defenseman Zane Schartz has provided an offensive spark from the defensive zone since returning from an injury in late October, and now ranks fourth in scoring with four goals and 14 assists. Graduate Peter Shantz, senior alternate captain Steve Bellew, senior Kyle Miller, and freshmen Kyle Crane and Jackson Giammona have helped bolster the back line in place of injured sophomore head captain Ben Hughes, who is due back this month.

Between the pipes, graduate Cary Byron (7-2-1) has started the past seven games, winning the last six while lowering his goals-against average to 3.25 and raising his save percentage to 91.4.

Stony Brook scouting report: The Seawolves have posted 9-1 records at home and away so far this season. They are again one of the highest scoring teams in the ACHA, after netting 197 goals (three more than the Flames) last season. Through 20 games, Stony Brook has four players with at least 25 points — J.T. Hall (15G, 23A, three game-winning goals), Tyler Underhill (23G, 11A, team-high seven power-play goals, five game-winning goals), Andrew Cetola (5G, 21A), and Justin Lazalde (7G, 18A).

"They're a fast transitioning team so it's important that we get pucks deep on them and handle their defense and get pucks on net," Logan said.

All-time series: Liberty still maintains a 19-8-3 lead over Stony Brook after splitting four previous series over the past two seasons — two at LaHaye and two at the Rinx.

Coaches: Kirk Handy is in his 16th season as Liberty's head coach with an overall record of 343-149-20. Chris Garofalo, in his sixth season as head coach of the Seawolves, is 135-52-4 overall. That includes a 28-5-3 mark in 2014-15, when he guided the team to the ACHA DI semifinals, and a 33-6 mark last year, when Stony Brook upset defending ACHA DI national champion Arizona State to reach the championship game.