Flames hope to find edges at this weekend's USCSA opener 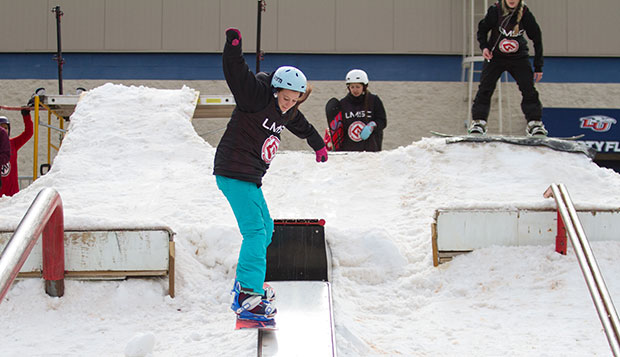 "There is not enough snow to facilitate a boardercross or ski-cross competition, but the Rail Jam is potentially going to be one of our strong points this season," Liberty Head Coach Ryan Leeds said.

Months of training at Liberty Mountain Snowflex Centre, the only dryland resort of its kind in North America, should give the Flames and Lady Flames skiers and snowboarders an edge on their competition from the USCSA's Southeast Region.

"It's going to be all Southeast Region teams, most of which are getting more competitive, so it will be harder to take the top seven spots as we've done in the past," Leeds said. I'm pretty confident we'll take the top three (in the men's snowboard category)."

He is expecting big things from junior team captain Brendan McHugh as well as sophomore Austin Santos and senior Chris Holt and a handful of newcomers who are learning the ropes from the veteran snowboarders and former Flames skier Jon Steltzer.

"I haven't seen them on snow yet, where the consistency of the surface is a little different," said Leeds, who has yet to take his team to Wintergreen Mountain Resort, which finally opened on Wednesday. "We'll see how they adjust to a more variable, sometimes icy surface."

Freshman skier Cole Kees and sophomore Andrew Garofalo, both new to the freestyle aspect of the sport and competing in their first collegiate events, have improved from training with experienced newcomers Isaac Shepard and Jonathan Wong.

"I'm fairly confident in the ability of the skiers," Leeds said. "Skiing usually has a smaller field (than snowboarding) but it's gotten a lot stronger than we've seen in the past when Tim (Steltzer) was on the team. It'll be interesting to see how Isaac (Shepard) and Jonathan Wong fare."

On the women's side, the Lady Flames will look for strong performances from senior snowboarders Brandy Fronte, who is returning from a Christmas family ski trip to Colorado, and Brooke Gibson as well as freshman skier Rebecca Lawrence.

After this weekend's event, the Flames will travel to Big Boulder (Pa.) for the TransWorld Trans-Am competition on Jan. 16 and to Boone, N.C., for a Rail Jam and Boardercross at Appalachian Mountain on Jan. 30. On Feb. 6-8, Liberty will compete at Massanutten Mountain Resort for Slopestyle, Boardercross and Skier cross events scheduled for Feb. 6-8 before competing in the USCSA Regional competition Feb. 11-13 at the National Winter Activity Center (formerly Hidden Valley) in New Jersey.