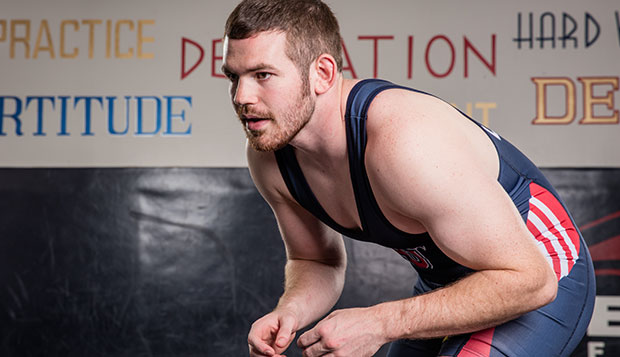 Flames 197-pound senior Alex Cox posted upset wins along the way to his fifth-place showing at the Citrus Invitational.

"We saw some great competition and kicked off the second semester on a great note," Flames Head Coach Jesse Castro said.

Sophomore Josh Ferenczy also came in fifth in an extremely talented and experienced 174-pound weight class, scoring a 19-2 technical fall in his first match before earning an 8-3 victory over Augsburg's Jackson Graham. After slipping to the consolation bracket by dropping a 13-4 major decision to New York University's John Messinger, Ferenczy lost an 11-2 major decision to Augsburg's Austin Boniface, the eventual third-place finisher, before finishing fifth by forfeit.

Flames 125-pound freshman Dell Ngonga, seeded seventh, was shut out in his first bout before advancing through the consolation bracket and scoring a 13-5 major decision over Millikin University's Zach Whitsel in the seventh-place bout.

Fellow freshman Logan Smith, also seeded seventh, went 3-3 to place eighth in an extremely deep 141-pound weight class. He slipped to the consolation bracket with a 6-5 setback in his opening match before winning his next three bouts in the wrestlebacks — 9-4 over Williams College's Gabriel Corrochano, 8-6 over Augsburg's Mike Hayes, and by pin in 2:56 over Waynesburg University's Fillipo Crivelli — before dropping his last two matches by 6-2 and 6-5 scores.

Junior Ike Podell bumped up a weight class and exceled at 157 pounds before withdrawing from the tournament on Wednesday due to injury. He recorded two pins — in his opener against Cornell College's Jordan Girard in 2:27 and Leonard Bloom in 1:52 in the consolation bracket,  after recording a 14-0 major decision over Augsburg's Dwayne Williams.

Podell filled in for sophomore Michael Bryant, who also wrestled up a weight class and went 2-2 with one pin at 165.

The Flames are now gearing up for the Jan. 8-9 Virginia Duals at the Hampton Coliseum, with a split squad also competing at the Jan. 9 Washington & Lee Invitational in Lexington, Va.