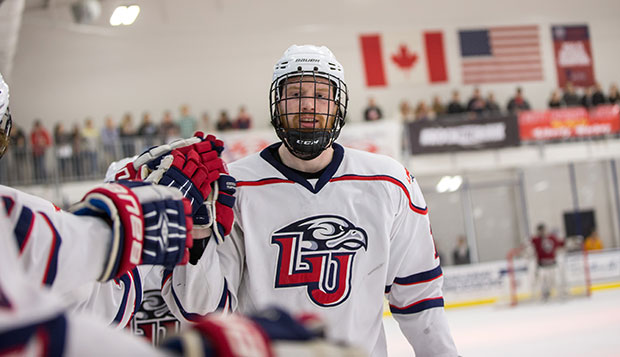 While most of the top-20 remained unchanged, Liberty University's ACHA Division I men's hockey team, winners of six games in a row, moved up one spot to No. 15 in the season's 12th ranking and last before Christmas.

For the eighth consecutive computer-based poll, 2013 national champion Minot State — which dealt the Flames their first two losses of the year — holds the No. 1 position, entering the semester break at 19-0-1.

Liberty (10-9-1), which finished its fall schedule with a lopsided sweep of unranked Indiana University of Pennsylvania last weekend at the LaHaye Ice Center, opens its 2016 slate at fifth-ranked Stony Brook, Jan. 9-10 at Long Island, N.Y.

The Flames, who rose above the .500 mark for the first time since after their Sept. 5 season-opener at Potomac, can take consolation in the fact that nine of their 10 losses (including the second-game shootout at Minot State) came against teams ranked in the top seven — No. 4 Davenport (three losses), the No. 5 Seawolves (two), and No. 7 Ohio (two), which has knocked Liberty out of two of the past three ACHA DI National Championships.

"The first eight or nine games, we were battling against the puck and it wasn't going our way," Flames freshman defenseman Zane Schartz said. "Now, it seems like we're just finding ways to win. It's been a good end to the year. Hopefully, we can carry it into 2016 and have a good push (toward the March 3-8 ACHA DI playoffs in Chicago)."