Flames finish fall semester above .500 with sweep of IUP 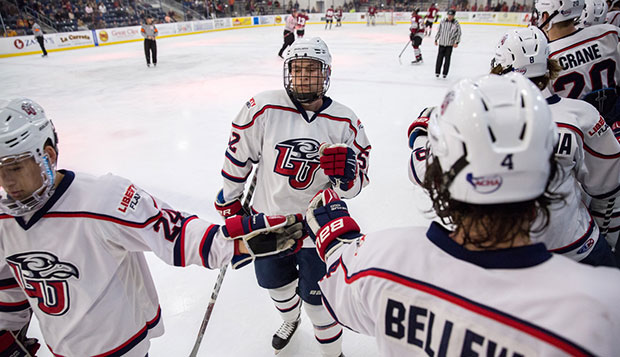 When freshman defenseman Zane Schartz was sidelined by a concussion, Liberty University's ACHA Division I men's hockey team was mired in a six-game slump, capped by back-to-back losses to Stony Brook in the newly renovated LaHaye Ice Center.

He didn't recognize his own team when he came back, after the Flames returned from a trip to Michigan where they staged a sweep of Oakland to start their current six-game win streak, extended by Saturday night's 7-3 triumph over Indiana University of Pennsylvania at LaHaye.

"The team I played with before my concussion and the team I've played with after my concussion is a completely different team," said Schartz, who distributed four assists and scored Liberty's last goal against IUP. "The first eight or nine games, we were battling against the puck and it wasn't going our way and now, it seems like we're just finding ways to win. It's been a good end to the year. Hopefully, we can carry it into 2016 and have a good push (toward the ACHA DI playoffs)."

Heading into the Christmas break, the 16th-ranked Flames (10-9-1) moved above the .500 mark for the first time since their season-opening win at Potomac after outshooting the Crimson Hawks (10-11-1) by a 51-30 count, their season-high total in shots.

"Zane's a guy who's battled some injuries this first semester, but it's nice for him to finish strong," Liberty Head Coach Kirk Handy said. "He shoots the puck and anything can happen when you shoot the puck."

IUP started the game on attack, remaining on the offensive until Liberty went on a power play three and a half minutes after the opening faceoff.

"It was definitely a better team than (Friday)," Schartz said. "It was a different game. They came out and they weren't going to go out without a fight."

The Crimson Hawks didn't waste any time capitalizing after the penalty kill, with junior Reid Duguid finishing off Tanner Gilliland's wraparound assist from behind the cage past Flames graduate goalie Cary Byron at the 14:20 mark.

Liberty bounced back to tie it up when senior forward and alternate captain Danny Logan received a pass from Schartz along the left boards and cut back from the left corner in front of IUP goalie Robert Stock and stuck the puck in the net before crashing into a defenseman with 4:57 left in the period.

"Logan's been a guy who's really embraced the leadership role on this team as a captain," Handy said. "He shows up every night and leads by example."

The Harris brothers connected on the go-ahead goal three and a half minutes later off another assist from Schartz, with junior Chase Harris faking a shot in the left crease before finding younger brother Owen Harris with a backdoor cross-crease pass on the right endline. The freshman forward went to one knee to lift a sharp-angled wrist shot over Stock into the side netting for a 2-1 edge.

IUP started the second period on a power play and quickly converted its second tying goal with Duguid putting away a rebound out in front past Byron to make it a 2-2 contest.

But once again, the Flames responded with two goals over the next 10 minutes, the first on a shot by Eric Masters tipped in by fellow freshman forward Ray Wilson crashing in front of the cage, putting Liberty back on top, 3-2, at the 15:13 mark.

Then, after Schartz had another one-timer stopped off a pass from Ward with the Flames on a power play, Ward scored top shelf off an assist from sophomore forward Paul Lamoureux.

The Crimson Hawks cut the deficit back to one goal at 4-3 when senior forward Nicholas Sette rifled a turnaround shot from the top left crease high over the shoulder of Byron with 7:41 left in the second.

Three minutes later, with the teams playing four-on-four hockey, Miller received passes from Schartz and Logan and launched a shot from the high slot over the glove of Stock, stretching Liberty's lead to 5-3 with 1:30 left  in the second.

Liberty extended the advantage from two to four goals even more quickly at the start of the third period when Owen Harris finished feeds from Schartz and Miller just one minute into the final stanza.

"The Harris brothers are really fun to play with because their chemistry off the ice contributes to their game on the ice," Schartz said. "They're very easy to play with. They found the open ice and I fed it to them and they buried it."

Schartz netted the final goal unassisted after taking the puck from Byron behind his own net, deking past two defenders along the left boards during a line shift, and finishing from a tough angle off IUP backup goalie Austin Moody.

"I wasn't expecting it to go in," Schartz said. "I was actually looking for a pass to Ray (Wilson) backdoor and I just threw it on net from the back left corner and it went off the goalie and it was in the net. I didn't even know that I scored."

Liberty has close to a month to celebrate Christmas and the New Year before opening the spring Semester Jan. 9-10 on Long Island, N.Y., at Stony Brook, looking to avenge its Nov. 6-7 home setbacks.

"To win six in a row is tough," Handy said. "This puts us above .500 and we've got some momentum going into Christmas break and to be able to build on for the second semester."