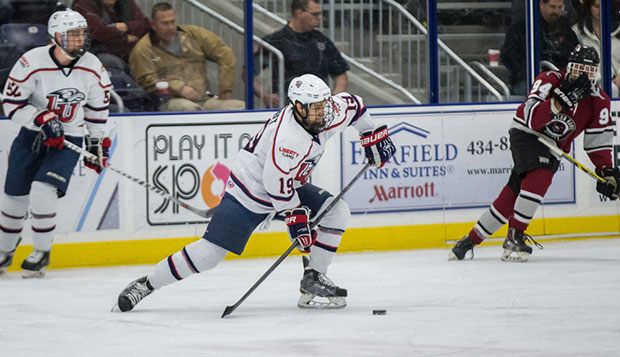 With the pressure of final exams looming, Liberty University's ACHA Division I men's hockey team was glad to be able to break open a four-goal lead on Indiana University of Pennsylvania in the first period in Friday night's opener at the LaHaye Ice Center, relieving excess stress on the ice.

"It was nice to find the offensive side of our game and to see it was kind of spread out, too," Flames Head Coach Kirk Handy said after the 8-1 triumph. "Up and down the lineup, we had some good chances tonight."

Liberty opened the scoring at the 14:08 mark of the first period when freshman forward Eric Masters finished his first goal as a Flame. Minutes after narrowly missing a point-blank tip-in of a shot from the left circle by senior defenseman Steven Bellew, Masters pocketed a short-ranged shot in the left crease off an assist from the left corner by senior forward Danny Logan who had received a feed from freshman forward Owen Harris.

"It was nice to see Eric Masters score a goal tonight because he's been real close," Handy said. "He's worked hard for us all year, every night."

Less than two minutes later, freshman defenseman Zane Schartz lifted a wrist shot from the right crease just over the crossbar before senior forward Tyson Street sent the puck from the left to the right circle to senior defenseman Kyle Miller, whose slapshot was deflected by junior forward Kyle Garcia past IUP goalie Robert Stock.

"That was a really nice tip," Handy said. "It was a beauty."

Street distributed his second assist three and a half minutes later, setting up Garcia's shot in the left crease to stretch Liberty's lead to 3-0. Then, after Stock saved Garcia's shot in the right circle, Logan put away an assist from junior forward Chase Harris by sticking back the rebound of his own blocked shot from point-blank range for a 4-0 advantage with 2:53 left in the first period.

Junior forward Grant Garvin netted the first of his three goals on the night to start the second-period scoring, tipping in a shot from near the blue line by Schartz set up by Chase Harris.

IUP junior defenseman Reid Duguid ended Liberty graduate goalie Cary Byron's shutout bid by sneaking the puck through traffic off a faceoff into the lower right corner of the cage with 11:38 left in the second before Garvin capitalized on a fast-break feed from fellow junior forward Robert Ward on an odd-man rush, launching a shot from in the slot that rocketed past Stock for a 6-1 advantage.

Midway through the third period, Ward sent a pass to Schartz at the top of the right circle and Garvin knocked in the rebound from deep in the right crease to make it 7-1 before Schartz cashed in on a five-on-three power play by blasting a shot from in the right circle past backup goalie Austin Moody for the final score with 7:48 to play.

"Cary's played well for us," Handy said. "Your best PK guy has to be your goalie and he was strong for us."

"We got into a little bit of penalty trouble at the end there in the third, when we were sort of playing on our heels for a bit, but it was nice to shut them down and kill those penalties off and then get out with a decisive win," Byron added. "My defense is blocking shots when they need to and sacrificing their body for me so I can't ask for any more than that. They're doing a good job of letting me see the puck, clearing the lanes, so they're making my job pretty easy."

It will be the last game of the semester for the Flames, who will have nearly a month to prepare for their rematch with Stony Brook, Jan. 9-10 in New York.

"We have to lay it all on the line," Handy said. "We have lots of time to recover."