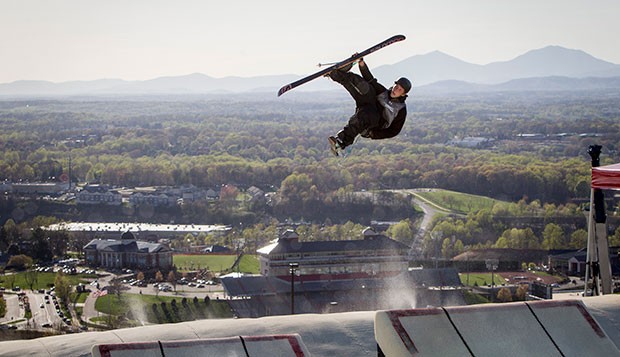 Liberty University freshman Isaac Shepard's family relocated from Bennington, Vt. — where he grew up skiing at Mt. Snow and Killington resorts in the nearby Green Mountains — to Lynchburg, Va., when he was 14. He enrolled at Liberty Christian Academy, located in the foothills of Liberty Mountain Snowflex Centre, which quickly became his new home away from home.

Over the past four years, Shepard has specialized in the sport he learned on snow, training on Snowflex and adding freestyle elements under the mentorship of Flames skiing siblings Jon and Tim Steltzer.

"Definitely, the Steltzer brothers, just to be able to ski with them and different people around the area that have come through have helped me learn tricks to get better every day," said Shepard, who has competed against the Steltzers at the past few Snowflex Games in the spring. "Jon and I have skied together a lot, so he's helped me increase my style."

This fall, Shepard followed the flock from LCA to Liberty, where he is an electrical engineering major and has helped re-establish the ski element of the Flames' ski & snowboard team as one of four new skiers, along with freshmen Jonathan Wong and Cole Kees, sophomore transfer Andrew Garofalo, and women's skier Rebecca Lawrence.

"She's a freshman, and this is her first year doing freestyle, so I have her as an alternate right now," Flames Head Coach Ryan Leeds said. "It's going to be a new aspect we haven't really had. It's always been one or two. It'll be good to have four solid skiers this year. I'm excited to see what Isaac and Jonathan do at nationals."

Former Flames snowboarder Kevin Hoff, who graduated last spring but still serves as a snowboard instructor at Snowflex and will begin pursuing his master's degree next month, is glad to see the nucleus for a strong ski team in place since snowboarders have dominated the roster in recent years.

"We have a much broader scope of talent on the ski team and they'll be able to feed off of each other compared to previous years where we had one or two people who were really, really good," Hoff said. "Now we have like three, four, or five. That's the best way to foster growth in skiing or snowboarding, with that community element. Now, they have a more directed focus. Regardless of whether or not they did the ski team, they're going to try to push each other."

While junior captain Brendan McHugh and senior Chris Holt should spur one another and the rest of the men's snowboarders on this winter, and seniors Brande Fronte and Brooke Gibson will spark the women's snowboarding team, Wong — who has been skiing in central Pennsylvania for the past 10 years and has progressed steadily in freestyle for the past five with guidance from his older brother — could learn the most from and provide the best challenge to Shepard.

Wong competed in numerous events his past season, winning a rail jam and placing second in slopestyle and skier-cross events as well as making the finals in the largest cash purse rail jam in the Mid-Atlantic Region. This past summer, he served as a ski coach at Liberty's Next Level Summer Camps.

All of Liberty's skiers and snowboarders can progress in their skills year-round on the only dryland facility of its kind in North America. Warmer temperatures in December have delayed the opening of ski resorts throughout the region, but the Flames have continued perfecting their tricks at Snowflex.

"It's real easy to improve your skills here," Shepard said. "It's a real consistent surface so you can practice your tricks over and over, get them consistent so then you can take them to snow in the winter season. I try to land the tricks as stylishly and cleanly as possible. It's something you keep working towards and setting your own personal bar higher and higher."

Having skied on snow since he was 3, he expects the shift from Snowflex to the various snow parks Liberty will travel to for its USCSA events this winter will be a natural one.

"I've been doing this for the last four years, and I've skied on snow so it's not a hard transition to take the same tricks here to snow," Shepard said. "Hopefully, over Christmas break, I'll get on snow. We start competing Jan. 9 on Beech Mountain (N.C.), and then we'll compete at other places like Appalachian Mountain (N.C., Jan 30-31) and Massanutten (Feb. 6), so it's going to be a fun year."

The Flames will have an opportunity to place as a ski team for the first time at the USCSA National Championships set for March 6-12 on Whiteface Mountain in Lake Placid, N.Y.