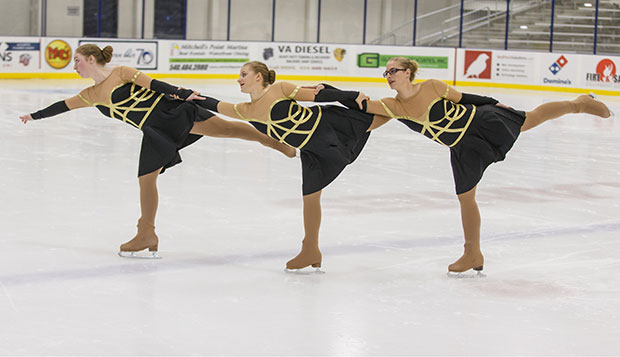 Members of Liberty's synchronized skating team practice their 1920s Great Gatsby-themed routine, which they will perform as part of Sunday's PraiseFest at the LaHaye Ice Center.

Twenty-seven members of Liberty University's figure skating and synchronized skating teams plus seven skaters from the Lynchburg community and one from the Washington, D.C., area will participate in Sunday's seventh annual PraiseFest, starting at 6 p.m. at the LaHaye Ice Center.

"It will be formatted like a recital, with each program having different themes and different costumes," Lady Flames Synchronized Skating Head Coach Tatiana Payne said. "In the past, we've brought more skaters from the community in to participate, but there was so much excitement from our skaters about doing a Christmas show that they definitely wanted to be involved," even right before final exam week.

Typically an Easter production, PraiseFest was canceled last spring due to the renovation and expansion of the on-campus ice rink. This year's performance will be more like a Christmas variety show, featuring more musical numbers and a larger cast of Liberty skaters than any previous PraiseFest.

Sophomore synchronized skating co-captain Brianna Gasterland said it will be a rare chance to see the Lady Flames' figure skaters and synchro skaters perform at the same time since their competitions are separate.

"It will carry the Christmas theme and I think it will be a lot of fun, very festive," she said. "We'll skate our synchro routine and participate in the opening act and the finale, but the figure skaters will definitely be the main event."

With the newly renovated LaHaye Ice Center providing expanded seating all around the rink, Payne said the show will be more spectator friendly.

"Normally, we would have a backdrop and a stage, but because of the seating style, we can have a 360-degree performance that's more three-dimensional," Payne said, noting the new video board will allow skaters to be identified between performances. "It will be more visual so the audience can follow along, and with the new overhead lighting system, it should provide a great Christmas effect."

The majority of the 19 performances will be solos, duets, or quartets, with the exceptions being the opening and closing acts, which will involve close to 40 skaters, and the synchro team's performance of its 1920s-styled collegiate program, set to the story of Great Gatsby.

Burkhardt, who excelled at last summer's USFSA Collegiate Championships, is nursing a back injury. "Cami isn't allowed to jump or do any high-impact spins yet, but her program is beautifully choreographed and very elegant," Payne said.

Also, College of Charleston graduate Jacquelin Zimmerman, the Junior Ladies bronze medalist at the 2014 U.S. Figure Skating Collegiate National Championships, will travel from the Washington, D.C., area, to perform to Katharine McPhee's version of "Somewhere Over The Rainbow."

Tickets are $5 for the general public and free for Liberty students.