Flames to host Crimson Hawks in final series of semester 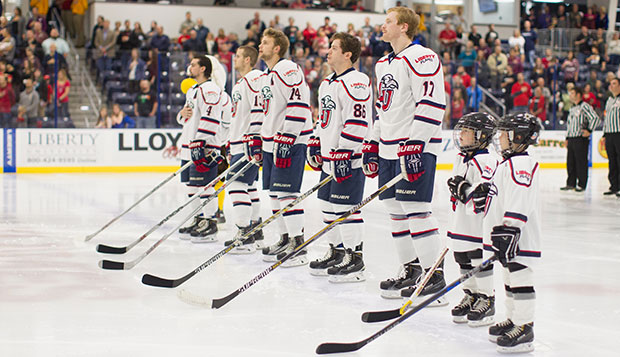 The starting lineup for the Flames' Oct. 23 home opener in the LaHaye Ice Center and two youth players stand at attention for 2014 alumna Courtney Garrett's singing of the National Anthem.

After losing its first six games at the renovated LaHaye Ice Center, Liberty University's ACHA Division I men's hockey team has won four in a row and moved up four spots to No. 16 in this week's ACHA DI rankings.

In their last series of the semester, the Flames can stretch their winning streak to six games and eclipse the .500 mark for the first time since their season-opening victory at Potomac by sweeping unranked Indiana University of Pennsylvania this Friday and Saturday on their home ice.

"We've been finding ways to win hockey games," Liberty Head Coach Kirk Handy said. "I think the big thing with us is just the confidence gained amongst the guys, especially the younger players, and seeing that their hard work's paying off now, too."

Friday is Faculty and Staff Night, allowing Liberty employees and their families or one guest to receive free admission to the game with departmental battles scheduled between periods. Saturday's game will be designated "Guns & Hoses" night, featuring intermission competitions between members of the Lynchburg Police Department and the Lynchburg Fire Department. Police and fire servicemen and women and their families will receive free tickets.

Liberty will need to continue to build momentum over the Christmas break with challenging rematches at No. 6 Stony Brook (Jan. 9-10) and No. 8 Ohio (Jan. 15-16), which both swept the Flames at LaHaye, awaiting them in the New Year.

"Winning's such a habit," Flames senior forward Tyson Street said. "It's becoming more and more consistent now and we just want to keep it rolling."

Liberty scouting report: The Flames have gotten key contributions from several players throughout their winning streak, with their nine freshmen playing more and more prominent roles as they enter the second half of their rookie seasons.

Graduate goalie Cary Byron has started the last five games in net, going 4-1 to raise his record to 5-2 while lowering his goals-against average (GAA) to 3.56 and improving his save percentage (SP) to 90.9. Junior Matt Pinel is only 2-5 but has comparable stats with a 3.87 GAA and 88.7 SP.

IUP scouting report: The Crimson Hawks, who are 6-5 in the College Hockey Mid-America League (CHMA), have already surpassed their win total from last season, when they finished 9-19-1. They have struggled on the road this season, going 3-7 on foreign ice and 7-2 at home.