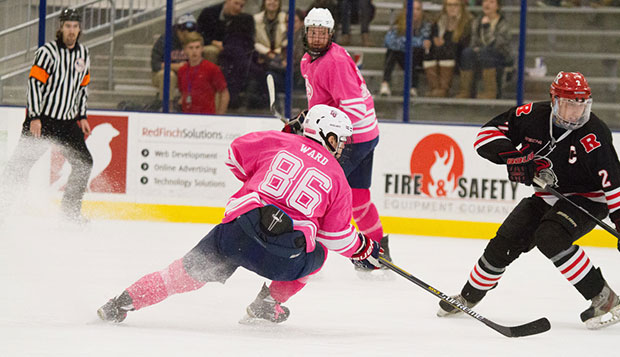 "We were expecting just to play in them during warm-ups, but it was maybe a coaches' decision to keep them on during the game and I thought we looked good in them," said senior forward Tyson Street, who scored the first goal in honor of his mother, Laurie, a breast cancer survivor. "It was funny to look around and we were all playing in pink, but we were all playing hard and it doesn't matter color our jersey was, we were there to play."

During the game, the Flames held a silent auction for those jerseys and donated the $870 in proceeds to the Lynchburg chapter of the American Cancer Society's Relay For Life.

"We didn't wash them," Club Sports Assistant Director Mike Morrison said, noting that might have diminished their value. "All the blood, sweat, and tears were still on the jerseys."

Junior forward Chase Harris, who scored two goals in Liberty's 6-1 victory over the Ice Knights, had the highest bid for his No. 13 jersey, which sold for $125.

Relay For Life of Lynchburg donated T-shirts that were tossed into the crowd during breaks in the game and glow sticks with cancer awareness notes attached to them that fans lit up when the lights were dimmed at the first intermission.

"(The ceremony) honored everyone who had cancer, is fighting cancer, or has family or friends who have battled cancer," Morrison said. "It was a great event that caused a lot of awareness and we had a lot of good feedback on it."

Club Sports video coordinator Pat Strawn produced a dozen video interviews with testimonials of players from four of the Liberty's five hockey teams, DI men's Assistant Coach Jeff Boettger and DIII Head Coach Rett McGibbon, and a team statistician who have family members affected by cancer. Boettger and McGibbon both lost their mothers to bouts with the disease in recent years. Many of the interviews were aired on the video board during timeouts and before Friday's and Saturday's games.

This Saturday's 7 p.m. semester-ending home game against Indiana University of Pennsylvania — the second of a two-game series that starts Friday at 7 p.m. at LaHaye — will be designated a Guns & Hoses night. Between-period entertainment will include competitions between members of the Lynchburg Police Department and the Lynchburg Fire Department.

"They won't be playing hockey, but games of tug of war and bubble soccer that should be friendly and spirited," Morrison said. "They're designed to create awareness for and give thanks to local service members and to let them have some fun."

Police and fire department employees and their family members will receive free admission to the game. In the future, the Club Sports department may organize an exhibition hockey game between the two departments — similar to the annual Guns & Hoses softball game played before a Lynchburg Hillcats baseball game — and turn it into a fundraiser for those Lynchburg emergency response services.