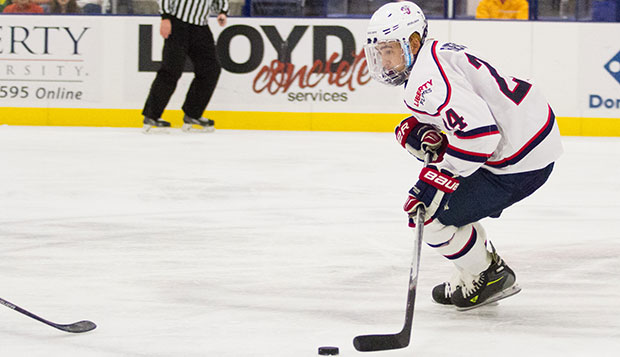 Before skating with their mostly student-body fans in a post-game celebration Saturday night at the LaHaye Ice Center, Liberty University's ACHA Division I men's hockey team gave them something to cheer about.

The 20th-ranked Flames (8-9-1) overcame a rough first period and two early deficits to stage a 5-2 upset of No. 18 Rutgers, getting goals from five different players to extend their winning streak to four games.

"They were fired up today, but I thought we did a really good job of battling back and then finish strong was huge for us," Liberty freshman forward Owen Harris said. "To keep the win streak going is huge for our team as we're building momentum until the end of the semester."

The Ice Knights (8-7-1) played like a different team in the rematch of Friday night's 6-1 setback, seizing a 2-1 lead on goals with just over 11 minutes and just over 11 seconds left in the first period. They capitalized on a power play when Jake Pyhel lifted a wrist shot from in the left circle under the crossbar past Flames graduate goalie Cary Byron, who was making his fifth straight start.

After missing a couple quality chances on a four-on-three power play, when senior goalie Christopher Marsillo denied point-blank shots by junior forward Robert Ward in the left circle and sophomore forward Paul Lamoureux near the left post, Liberty tied the contest with 2:47 to go on a beautiful give-and-go fast-break feed from senior forward Tyson Street to freshman forward Zechariah Roberts back to Street in the right crease.

Roberts later netted the game-winning goal midway through the third period on a follow of a shot by senior forward Kyle Garcia (three assists) in the left crease.

"Zechariah Roberts played a whale of a game tonight," Liberty Head Coach Kirk Handy said. "He's just gotten better every time he's out there and is a big part of our penalty kill. He's out there with two seniors now, Street and Garcia, and he feels real comfortable playing with those two."

Rutgers reclaimed the lead with just 11.2 seconds remaining in the first period off a faceoff in the Flames' end when CJ Maksut cashed in on a rebound after a kick save by Byron near the left post.

Liberty re-tied the contest at the 4:40 mark after senior forward Danny Logan controlled the puck at the top of the left circle and skated wide before threading a pass across the goal to junior forward Chase Harris for a wide-open finish in the right crease.

"That was a fantastic pass by Danny," Owen Harris said. "He made a great play, Chase was where he needed to be, and Danny put it right on his tape."

A minute and a half later, the Ice Knights went on a power play and Byron made a clutch glove save of a shot through traffic by defenseman Brenden Siegel before Flames freshman forward Eric Masters narrowly missed a shorthanded breakaway backhander.

"Cary's played well," Handy said of Byron, who made 25 saves to win his fourth game in a row. "He's a guy who's battled. That's kind of been the theme over the last games we've had. There were times where he willed the puck out of the net and was able to make the saves when he had to for us."

In the third period, after Byron made a stick save from on his stomach to help kill another penalty, Roberts finished the follow by Garcia for a 3-2 lead with 11:30 remaining in regulation. Then, with Rutgers on a power play, Street and freshman forward Jeff Wilson provided aggressive offensive pressure and freshman defenseman Zane Schartz narrowly missed on a shorthanded counterattack before coming back on defense to force a turnover at mid-ice. He knocked the puck away from an Ice Knight forward before Chase Harris tipped it to his younger brother, who sent it between a defender's stick and skates in the right circle before poking it past Marsillo for a spectacular score at the 8:00 mark.

"That's my go-to, usually," Owen Harris said of his five-hole finish. "It was pretty sweet. It was awesome. All in all, I was really glad we got the win today. That's really what we were excited about."

Rutgers pulled Marsillo for the final 1:24 and Garcia barely missed a shot from Rutgers' blue line after intercepting a pass before Roberts gathered the puck along the left boards and sent a backhanded pass to Logan for the empty-net finish to put the sweep on ice with 15 seconds left.

"I didn't think we played our best game tonight, but we've been finding ways to win hockey games," Handy said. "First period, we didn't play well, second period we played a little better, third was our best period, obviously. We got stronger as the game went on, which is a good sign. We'd like to get a little stronger at the beginning of the game, but you're going to have those games where you have to battle through and we found a way to win the game tonight."

"The first period, we came out a little bit slow, the next two periods, we did what we wanted," Roberts added. "We got shots, won the one-on-one battles, and were disciplined."

Liberty concludes its fall semester schedule next Friday and Saturday at 7 p.m. at home against unranked Indiana University of Pennsylvania.